Stern: Germany as a Role Model for Russia, not vice versa 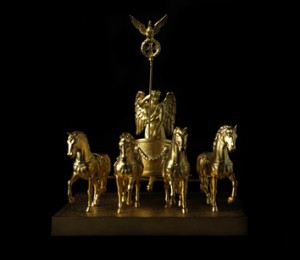 It is to be welcomed that German Netzwerk Quadriga withdrew the award of the Quadriga prize to Russian Prime Minister Putin at the very last minute.  The strong public reactions to the plans to give this award to Putin, and the continued justification by some members of the jury of such decision, raises the question how the future dialogue between Russia and Germany should be shaped.

A version of this article was published in the German news magazine Stern.

Awarding of prizes to leading political figures usually involves a degree of exaggeration as well as selective omissions of history.  Even by these standards, the recent decision by the jury to present Putin with its prestigious annual award would have been horribly misjudged.

The Quadriga Award is associated with values, model behaviour and innovative ideas focused on the future that Germany admires.   Does Germany really see Putin’s Russia as an inspiration and a model for the future?  Putin’s growing crisis of legitimacy at home certainly suggests that a majority of Russian citizens do not.

The award would still have been problematic even if we were to put aside the most obvious human rights violations under Putin’s rule over the past eleven years, ranging from the bloody counter-insurgency in the North Caucasus, to the brutal treatment of opponents, and the destruction of the judicial system symbolised by the murder of lawyer Sergei Magnitsky and show trials of former Yukos employees.

Only in an exercise of wilful collective amnesia can we erase from our memory the profound, systemic corruption of Russia under Putin, the squeezing of the media and civil society that has led to Russia being ranked at the level of a struggling African country in terms of the transparency of its business environment.  The recent pleasure boat tragedy on the Volga is yet another reminder that the Russian state has become dysfunctional and unable to protect its citizens.

The liberal political commentator Dmitry Oreshkin in an interview on the Russia radio station “Ekho Moskviy” on 12 July gave a succinct account of Putin’s achievements since he came to power: “In his first presidential address in June 2000 Vladimir Putin quite correctly pointed out that three things were slowing down economic growth: high taxes, corruption, and the tyranny and criminality of bureaucrats. “In order to overcome these troubles, it is necessary to strengthen the state”, Putin said. Well, the state was strengthened, and the number of bureaucrats doubled and the amount of bribes multiplied by ten or more, and the siloviki have merged criminal elements and security forces into one. Now it’s time to ask: What is the benefit of this vertical model, which we so carefully set up? And why is the man who created this model sitting at the top not accountable for any of it?”

For many years we have observed a race to the bottom in Europe to establish preferential relations with Moscow, and given Germany’s significant investments and perceived dependence on Russian energy resources, it should not be surprising that people like former Chancellor Gerhard Schröder and key German industrial leaders should attempt to transform the Bundestag into a lobbying resource for Gazprom.

In Germany’s diverse political environment there are nevertheless many who have resisted the idea that good relations with Russia must be accompanied by a sacrifice of rules, values, and tolerated violations of international law.  However the “new Ostpolitik” of the opportunists continues to creep forward.  This “pragmatic” view of Russia is even described in all seriousness as Russlandverständis as if the view to the contrary represents a misunderstanding of the country.  Russlandverständnis in fact reflects a poor understanding of the negative impact that acquiescence in Russia’s mafia-like governance has on German institutions, businesses and political culture.

This opportunism is led by a group of German businesspeople and political associates who argue that supporting Putin’s narrative secures investments and jobs.  This is not the Germany of values that we have come to admire.   In an attempt to find a comfortable and profitable modus vivendi with Russia the opportunists believe that uncritical acceptance and engagement with Putin may in the long run soften his rule and increase German leverage to improve the strength of Germany’s voice in favour of Rechststaatlichkeit and core human values.

Our view is that this approach defies Russia’s history and ignores the cost to Germany’s credibility, most particularly with those groups in Russian society that contain the seeds of the country’s renewal and spiritual re-birth.  If Germany owes a debt to Russia, and we believe it does, it should be repaid not with opportunism but with honesty, not with eyes firmly shut but with mouths wide open.

Opportunism is not Ostpolitik when gross violations of human rights and rule of law are routinely admitted by Russia’s leaders in words but denied in acts. It was Anna Politkovskaya who said that to understand Putin’s rule is not to accept that Russian DNA differs from our own but rather to understand that the atrocities of Chechnya trained a generation of Russian law enforcement officers in torture and bending of rules that was exported throughout the Russian Federation.

Germany must not make the mistake of accepting the Kremlin’s narrative for the world to remain endlessly patient for its “reform from within,” “modernisation,” and the embryonic growth of democratic society through the creation of hollow state-approved opposition parties.