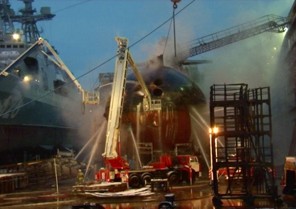 Ever since August 2000 when the Kursk languished on the bottom of the Barents Sea, with its 118 crewmembers suffocating inside it, the Russian submarine has come to be an formidable symbol of potential tragedy.  It has been a year of disasters across the transportation and aviation spectrum in Russia, so when the news came in today that the Delta IV class SSN Yekaterinburg nuclear submarine was engulfed in a huge blaze in an Arctic shipyard, it was scarcely a bolt from the blue.  Seven people have been hospitalized from smoke inhalation and, according to this report, an unidentified number of crew members were on board whilst the blaze was raging.  Fortunately the fire has, reportedly, now been entirely extinguished, with no fatalities reported, and no radiation leaked.  The habitual promises of investigations and renewed security measures will doubtless be made, with the habitually scant results (Streetwise Professor has a neat account of this year’s disaster impunity here).  The Guardian‘s John Vidal also highlights that the area in which this latest accident occurred, the Murmansk region, is seeping with potential nuclear catastrophe:

Nearly 20% of the world’s reactors and nuclear fuel is concentrated in the region. A few obsolete nuclear submarines are decommissioned each year with the help of US and Norwegian aid, but the nuclear legacy is growing as Germany and former Soviet states send their radioactive research reactors and nuclear waste there for decommissioning and eventual shipment to the Urals.

Many of the stores are in a dangerous condition and are leaking water and radioactive substances into the soil and water.
In the 1970s and 1980s, the sea of Murmansk was used as a dump site for exhausted cores from Soviet nuclear reactors and the nearby island of Nova Zemlaya was the site of more than 130 nuclear test explosions in Soviet times.

Andreeva Bay near Murmansk is the biggest single storage site for spent nuclear fuel from nuclear-powered vessels. More than 22,000 spent fuel rods, 93 nuclear reactor cores and 35 tonnes of liquid nuclear radioactive have been dumped there.