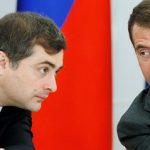 Who to blame, may well be the question crossing the collective mind of the United Russia clan, after the whipping the party’s majority received on Sunday.  Putin and Medvedev are obvious targets, but what of the man who, certain analysts (and Mikhail Prokhorov) argue, really pulls the strings.  Vladislav Surkov, widely credited as the architect of managed democracy, has given a rare interview to blogger Sergie Minayev.  Via the Wall Street Journal, here is the top political strategist’s view on what went wrong (nothing, apparently):

“For a party that turned out to be in power during a deep global economic crisis, this is a good result,” he said. “Add to that the painful but necessary reforms of the (Interior Ministry) and army, plus the forced increase in taxes on business needed to preserve social benefits, then one can say this is a very good result.”

“And if we don’t forget about how much (President Dmitry) Medvedev  and United Russia did to develop democracy and political competition….opportunities for manipulation were decisively cut off – I repeat, this is an outstanding result,” he said.

Monday, Western election observers condemned the election as not fair or free and rife with manipulations. Mr. Surkov dismissed allegations as “disrespectful” of the voters. “Violations happen but they don’t have any impact on the results because there simply aren’t many of them.”

First, “a mass liberal party, or more precisely, a party for the annoyed urban communities.” He said those voters are already incorporated into the system, though they may not want to admit it – “through opposition media that belong, strange as it may seem, to the state or structures affiliated with it, the staffs or audiences of which they are a part.”

“That’s of course not enough…they should be given parliamentary representation,” he said.

Second, he said, “Among Russian politicians, there aren’t enough people who respect the second law of thermodynamics….In vulgar terms, it says that in closed systems, disorder grows,” he said.

“The (power) vertical responds to breakdowns even more vertically, simply, more primitively. That’s a mistaken method. It leads to a more closed system and thus to more chaos.”

“As a result, for the system to preserve itself and develop, it needs to be opened up. New players need to be allowed in,” he said.

“We can’t allow ourselves to wind up in the situation of ‘solus rex’ – the lonely king,” he said.

“The period of cleaning up and nursing the damaged political system of the 90s is over,” he said. “So the modernization of the political system started in recent years by Medvedev and Putin should be continued.”