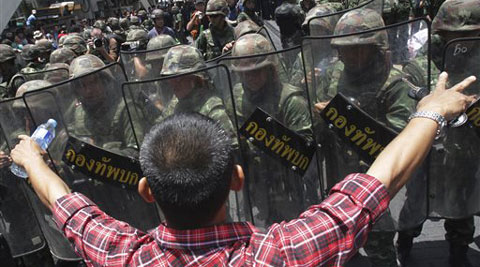 The deep freeze of the Thai people’s most basic freedoms and liberties began not after the May 2014 coup which installed the present military regime but on September 19th 2006. It was on that warm Bangkok night ten years ago today that the tanks rolled out and crushed Thailand’s short-lived experiment with a genuine pluralistic democracy.

It wouldn’t be too far-fetched to claim that the build up to that fateful September evening was carefully choreographed and stage-managed. An elite network of royalist aristocrats, military officials, their apparatchiks in the Thai Democrat Party and the yellow-shirted Orwellian-named People’s Alliance for Democracy (PAD), mobilised collectively to lay the groundwork for the coup. Broadly speaking, this elite network claimed that the three-times election winning Thai Rak Thai (TRT) party – led by the massively popular Thai PM, Thaksin Shinawatra – was a corrupt existential threat to “Thainess” and to the institution of the monarchy. If Thaksin and TRT weren’t removed it would mean the end of Thailand – or at least the Thailand the elite networks preferred.

This “coalition” to oust Thaksin, whilst clearly lacking any form of popular support, was broad if not deep. Lined up alongside the elite networks against Thaksin in tacit support of the coup – in what proved to be an appalling misjudgement – were “human rights” groups, some members of Bangkok’s diplomatic community and even parts of the Western media. Thaksin himself, a Sino-Thai businessman from the unfashionable north of Thailand, first came to power in 2001 and then won a massive landslide victory in the February 2005 general election. Whilst questions remained about Thaksin’s authoritarian tendencies and less than fulsome commitment to human rights it wasn’t this that terrified the Thai elite networks in the military and aristocracy. It was that a new very effective power was emerging in Thailand, mandated democratically by the people and with the ability to transform the nation into something modern, pluralist and economically liberal. They decided that it had to be stopped.

The Thaksin-led Thai Rak Thai party won the first general election after the establishment of Thailand’s 1997 constitution in 2001. Long regarded as the most democratic charter in Thailand’s history the 1997 constitution paved the way for a strong PM and democratically elected upper and lower houses. Power to make laws, for the first time, was almost fully passed over to the elected representatives of the Thai people. TRT and Thaksin immediately took advantage of the 1997 charter by putting a raft of progressive policies – affordable healthcare, poverty alleviation, liberalisation of markets – to the Thai people and they were then swept to power in the 2001 general election.

It quickly became apparent to the Thai elite networks – referred to as the “amaart” (a word that translates, loosely, as feudal lords) by the Thai pro-democracy movement – that Thaksin and his elected government were no longer going to kowtow to them. And, with each progressive policy successfully implemented, that Thaksin and TRT’s popularity would only grow and grow.

The amaart’s political representatives – the Thai Democrat Party – were soundly beaten in 2001 but reduced to tatters in the February 2005 election that followed. TRT – the first democratically elected political party to serve a full term in office and then to win again – were now in sole charge of the law-making in Thailand. So, by late-2005/early-2006 a number of “corruption” scandals against Thaksin and TRT and ludicrous claims of “black magic” were fashioned out of thin air and the “People’s Alliance for Democracy” (PAD) took to the streets.

Unfortunately the PAD represented neither the people nor democracy and their initial aims to stop human rights’ abuses and end corruption were soon turned into calls for coups and the end of democracy. These latter moves revealed the PAD’s real agenda and real backers, and so in April 2006 Thaksin called an election.

The opposition Thai Democrats, now led by the effete British-born and educated Abhisit Vejjajiva, refused to stand in the April 2006 election rendering it little more than a plebiscite on Thaksin and the TRT government. Even so there was still a 65% turnout with TRT winning an astonishing landslide of 61% of votes cast.

The PAD in a remarkable admission of their complete lack of belief in democracy stated they would not recognise the election results. Rather bizarrely, the PAD also complained to the Constitutional Court – a body stuffed full of amaart representatives – that the voting booths were not positioned correctly. The court agreed and so millions of Thais’ votes were wiped away as the election result was declared null and void based on this absurd technicality. TRT and Thaksin responded in the way any democratic government should respond – they called another election in October 2006. It was clear that Thaksin and TRT would not roll over and nor would they tug their forelocks. The scene was now set for the September 2006 coup.

Just after the tanks rolled on that September evening, the public face of the coup, General Sonthi Boonyaratglin, declared, in a typically Orwellian moment that the country would now by run by the “Council for Democratic Reform” (CDR). The widely speculated de facto leader of the coup was the head of the privy council and former Thai dictator, General Prem Tinsulanonda, a man noted for his Machiavellian tendencies whilst in the background a number of senior and key army personnel became identified as key organisers. These included high-ranking officers like Prayuth Chan-ocha, Anupong Paochinda, Daopong Rattanasuwan, Udomdet Sitabutr, Prawit Wongsuwan and Paiboon Kumchaya.

With the country now firmly under Thai Army control, the amaart made their move against Thaksin and the TRT, establishing various corruption committees to look into the activities of the ruling party and the ousted PM. The claim was that by staging the coup the army would “restore real democracy” and “end corruption”. In fact what happened was that in the years that followed the 2006 coup democracy never really returned to Thailand. This was the real aim of the amaart and their allies in the army – to remove sovereignty from Thais and make sure it never returned until the people voted in the “correct” way.

The first obvious evidence of this was a military appointed committee disbanding TRT and banning Thaksin and the entire TRT leadership from public office for 5years despite none of them being convicted of any crime or indiscretion Then came a cooked-up corruption case against Thaksin himself involving the purchase his wife made of land at market prices – according to the then Thai law a husband had to sign the purchase agreement. Thaksin dutifully signed the document and this technicality resulted in his being convicted of corruption and receiving a prison sentence (he appealed and was bailed in court).

After the new, less democratic military sponsored 2007 constitution was passed by a meagre 33% of Thai voters elections were held in late 2007. Former TRT activists with the support of Thaksin had cobbled together a new political party, the People’s Power Party (PPP) to contest the election and, to nobody’s surprise, they won.

The PAD were publicly incensed by the result and within a few months began to protest once more, laying siege to the government’s seat of power in Bangkok, Government House, and staging increasingly violent protests. Yet this time it was clear the public had had enough of the elite-sponsored PAD. Their numbers soon dwindled to less than 5000 – the result was that the PAD’s actions became more and more desperate.

This desperation culminated with the infamous occupation of both of Bangkok’s main airports by the PAD in November 2008 – something tacitly endorsed by the army and publicly supported by the increasingly anti-democratic Thai Democrat Party. With the Thai people now held to ransom by the tiny but well-organised, resourced and violent PAD – their members had murdered, shot and tortured their way to securing control of the airports – the Constitutional Court intervened once again.

Based on vague electoral fraud charges concerning a tiny number of PPP activists the Constitutional Court decided to disband the ruling party and ban its entire leadership from holding office. In effect another coup – a judicial coup – was staged.

The Democrat Party and Abhisit Vejjajiva wasted no time in working with the army to put together, via a series of threats and bribes, a coalition government. By mid-December Abhisit was installed as PM and the “Democrats” established themselves – despite being trounced repeatedly in every election since 2001 – as the new party of government.

By April 2009 the newly formed United Front for Democracy Against Dictatorship (UDD) mobilised a vast protest of 100s of 1000s of “Red Shirts” in Bangkok against the illegitimate Abhisit-led govt. The UDD had only one simple aim – for a new election to be called. Instead Abhisit sent in 1000s of heavily armed troops and the protests dispersed.

Within a year in March 2010 the Red Shirts were back. This time they were more committed, better organised and ready to take direct action against Abhisit’s regime. After a series of skirmishes and with the situation spiralling our of control on April 10th 2010 Abhisit sent in heavily armed troops to crush the protests. Eighteen unarmed Red Shirts, five soldiers and a Japanese journalist died in the chaos that ensued as the young army conscripts abandoned their posts and their weapons and fled.

The Red Shirts then moved to a fortified encampment in central Bangkok and after a leading UDD figure was assassinated by a Thai Army sniper on May 13th a ruthless and brutal crackdown was played out with dozens of unarmed Thai civilians slaughtered by Abhisit’s troops including medical staff and children (a full account of the 2010 Bangkok Massacre can be read here. The protests finally collapsed on the 19th May with several buildings under Thai Army control mysteriously catching fire and a massacre at a sanctuary inside a Buddhist temple.

Abhisit’s regime limped on until mid-2011 when new elections were called. Of course the latest incarnation of TRT, the Pheu Thai Party (PTP), led by Thaksin’s urbane sister, Yingluck Shinawatra, romped home in yet another landslide election win. And, once again, the anti-democratic forces of the amaart began to play out their mix of violent street protest, politicised judicial manoeuvres and army threats. The Thai people, it seems, just kept voting for the “wrong” people.

After yet another series of very violent protests by yet another Orwellian-monikered amaart protest group – this time they called themselves the People’s Democratic Reform Committee – who were openly calling for the end of democracy, the ousting and even murder of Thaksin and his family, it was clear the Yingluck-led PTP government was not going to back down. The usual slew of trumped up corruption cases followed and by May 2014 another military coup was staged.

It was clear in the weeks that followed the 2014 coup that the amaart had learnt their lessons from 2006 – there was no pretence of any sudden return to democracy after this coup and 100s of people were rounded up to be “re-educated” (eg threatened and/or tortured) in Thai Army camps. Even the main protagonists were the same with the high-ranking Army officers from 2006 – many also helped organise the 2010 Bangkok Massacre – now moving into senior government positions. For example, General Prayuth Chan-ocha led the 2014 coup and has held the office of PM ever since. General Prawit Wongsuwan, is now both the Deputy PM and Minister of Defence whilst General Udomdet Sitabutr is Deputy Minister of Defence and General Daopong Rattanasuwan is Minister of Education. The chief architect of the 2008 judicial coup and the 2010 Bangkok Massacre, General Anupong Paochinda is now the Minister of Interior whilst General Paiboon Kumchaya, who also played an important role in 2010 is Minister of Justice.

The same faces using the same tactics and strategies with the same capacity for ruthless violence have held sway over Thailand since 2006. The September 19th coup was just the first part in the continuing Winter that has befallen Thai democracy. It is only when the Army and their allies in the amaart are placed firmly under the rule of law afforded by accountability and democracy that Thailand’s long freeze will end.