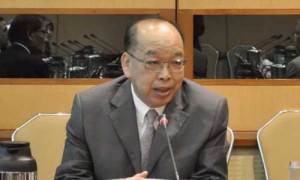 As many readers of this website are aware, for the past two and a half years, my law firm has been working on behalf of the Red Shirts pro-democracy movement of Thailand, seeking justice for the killing of more than 90 protesters by government forces. Today, the Bangkok Post reported the following news:

His comments follow a meeting on Thursday with ICC chief prosecutor Fatou Bensouda to discuss the steps Thailand would be required to take if it is to accept ICC jurisdiction.

United Front for Democracy against Dictatorship lawyer Robert Amsterdam petitioned the ICC in January 2011 to launch a preliminary investigation into the alleged killings of civilians by security forces during the 2010 protests under the basis of “crimes against humanity”.

The foreign minister insisted that by extending the jurisdiction to the ICC, the government would not be inviting the international tribunal to interfere in the country’s internal affairs.

Thailand has not ratified the treaty that founded the ICC. The court’s jurisdiction, however, can be established if the country makes a declaration accepting the court’s power on an ad hoc basis.

Mr Surapong shrugged off criticism that such an agreement would become politically explosive and that he was under pressure from the red shirts to proceed with the issue.

“It is to deliver justice to those who died,” he said.

“Personally I think the government should accept the ICC’s ad hoc jurisdiction on the clashes,” he said.