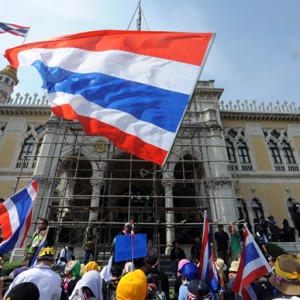 The United Kingdom (UK) is considered to be one of the planet’s pre-eminent constitutional monarchies. It’s not without its problems but its longevity & stability are based on the absolute split between the elected persons who make the laws and the head of state, the monarch, who acts as the functionary to sign them onto the statute book.

This relatively simple arrangement is neatly summed up on the official website of the British monarchy in that – “The ability to make and pass legislation resides with an elected Parliament, not with the Monarch.”

It’s a very clear premise. The ability to pass legislation in a functioning constitutional monarchy doesn’t reside with the army, royally appointed senators or a vast network of palace associates in unpopular political parties but with an elected Parliament.

And, of course, a functioning constitutional monarchy does not have to enforce itself via the terror of appallingly draconian censorship laws or hate campaigns that refer to critics of the monarchy as “human garbage” and whose supporters routinely call for murder and torture of said critics.

Another way or understanding a constitutional monarchy is as a “crowned republic”. This term first gained currency during the debate in the 1990s on whether Australia should renounce the British monarch as head of state and become a full republic.

What was noted by the committee looking into the constitutional changes Australia would need to make to become a republic was how little would actually need to change.

“Australia is already a state in which sovereignty derives from its people, and in which all public offices, except that at the very top of the system, are filled by persons deriving authority, directly or indirectly, from the people. The only element of the Australian system of government which is not consistent with a republican form of government is the monarchy.”

Needless to say in Thailand things are very far from being the accepted international understanding of a “constitutional monarchy”.

The most obvious factors that undermine “constitutionality” are the roles of the Army – who exercise power beyond any constitutional or legal norm or framework, acting as a “deep state” whose only sovereignty is gained from their ability to organise violence, hence their numerous coups – and that of what British academic Duncan McCargo described as the “network monarchy”.

According to McCargo the “network monarchy” can be understood as “a form of semi-monarchical rule” led by “the Thai King and his allies” which is “inherently illiberal, because it advocates reliance on ‘good men’, and the marginalization of formal political institutions or procedures.“ Moreover it involves “active interventions in the political process by the Thai King and his proxies”.

So what prevents an active participation of Thais in a discussion about how the actions of the network monarchy or the extra-legal and coup-happy Army have disrupted their democracy? Thailand‘s draconian and appalling lese majeste law.

As anyone interested in Thailand will tell you “lese majeste” is the “crime” of making statements “against the monarch”. It is listed as law number 112 in Thailand’s Criminal Code and states, “Whoever defames, insults or threatens the King, Queen, the Heir-apparent or the Regent, shall be punished with imprisonment of three to fifteen years”.

Unlike other Thai laws anyone can instigate an investigation into a breach of the lese majeste law and with such draconian punishments attached to it and vague, irrational and cruel interpretations of it applied by the Thai courts, it has become the “legal” terror weapon of choice of both the contemporary form of the network monarchy and the present Thai military junta.

People, such as Thai journalist Somyot Prueksakasemsuk, have received lengthy prison sentences even for publishing allegorical and metaphorical references to the monarchy whilst an elderly man, Ampon Tangnoppakul, was given a 20year jail term for sending sms messages critical of the monarchy to a member of Thailand’s Democrat Party with even the presiding judge admitting that Mr Tangnoppakul’s guilt was not fully proven.

Mr Tangnoppakul later died in prison in the most terrible and tragic circumstances.

More recently the coup regime of General Prayuth has sought to extend the terror of lese majeste further, with critics and academics being forced into exile and multiple arrests being made under the auspices of this law. The most extreme case has involved the arrest and imprisonment of two young members of a theatrical troupe who were involved in the performance of a play entitled “The Wolf Bride” which was deemed to have uttered metaphors and allegories that were insulting to the monarchy.

These two young people were then forced under duress to “confess” to their crime and are now awaiting sentencing – it should be pointed that those who refuse to “confess” to lese majeste are refused bail and kept for years in the filthy overcrowded conditions of Bangkok’s remand prison.

In conclusion what is clear is that Thailand is now a military dictatorship. One of the clearest indications that Thailand remains beyond internationally accepted norms of “constitutionality” is the continuation of the lese majeste law and its application as a form of terror in the Thai body politic.

Whilst 112 remains Thailand will always remain less that it could be.