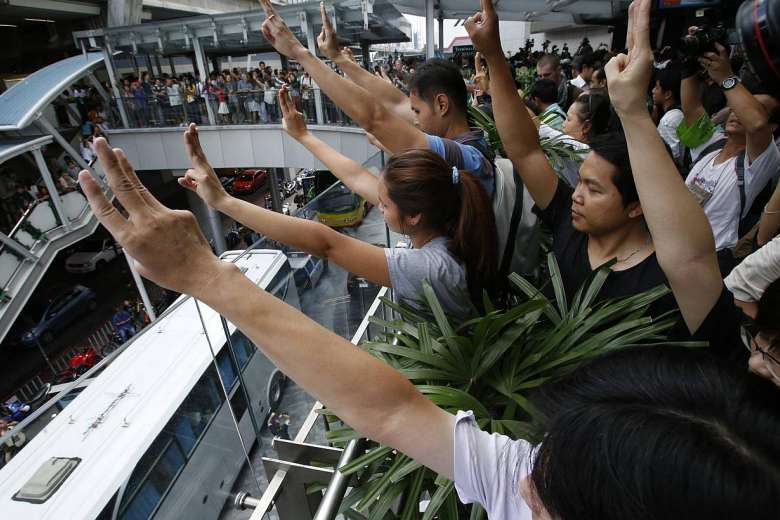 WARNING: SHARING OR DISTRIBUTING THIS ARTICLE IN THAILAND COULD RESULT IN 10 YEARS IN PRISON.

It’s now more than two years since the the Thai Army rolled their tanks down Thailand’s roads and crushed that nation’s fragile democracy. Since then there’s been a stream of arrests, repression, corruption and inept, unaccountable governance of the kind that defines the caricature of rule by ludicrous dictatorial fiat.

Thailand’s motley band of thuggish generals – whose junta is endowed with the Orwellian title “National Council for Peace and Order” (NCPO) – led by the strutting and grimacing General Prayuth Chan-ocha, have now seen fit to impose an anti-democratic “constitution” on the Thai people. Their chosen method to do so is via yet another layer of anti-democratic manoeuvring – a referendum in which nobody is legally allowed to campaign, with the penalty for doing so being up to 10years in prison.

Obviously, it would be foolish to believe that a military government which took power down the length of a tank-barrel should be expected to conduct themselves in a way consummate with democracy. The Thai general’s referendum is just yet more evidence that with them in charge the country is firmly on the path to exiting democracy, fully and completely.

As a counterpoint, over the last weeks the world has watched as Britain has conducted its epoch defining EU Referendum. The result after months of intense campaigning was in favour of “Brexit” – the British exit from the single EU market. It’s our suggestion that the Thai general’s referendum can therefore safely be entitled “DemExit” – the Thai Army’s attempt to “exit” Thailand from democracy.

In this most recent cycle of Thai Army interference in Thai democracy – they have, after all, conducted 19 coups – this multi-layered destruction of Thai citizens’ enfranchisement and sovereignty began with the removal of a democratically elected government in 2014 and the abrogation of the existing constitution.

After the coup a new constitution drafting committee was then founded by the illegal Thai military junta. This committee was, of course, stuffed full of military appointees, none of whom were noted for their commitment to democracy and rule of law.

It was therefore no surprise that the “constitution” this committee has produced is not a move to re-establish democracy in any meaningful way but merely a tool to legitimise both Army interference and the destruction of Thai democracy.

Even a cursory look over the proposed “constitution” (http://www.icj.org/wp-content/uploads/2016/06/Thailand-Draft-Constitution-EnglishTr-Advocacy-2016-ENG.pdf) reveals this real aim. Sections 88, 158, 159 and 272 are definitive attempts to undermine the democratic legitimacy of any future Prime Minister, whilst Section 269 allows the NCPO to direct the appointment of the entire first sitting of the proposed 250-strong senate/upper house and also secure, in perpetuity, the right for leading military officers to hold “permanent” positions in this senate. Section 5 grants the newly formed constitutional court almost ad hoc power to enforce the constitution as it sees fit, removing any form of democratic accountability whilst Section 219 accords powers to this court to set vague ethical and moral codes, the breaching of which could lead to the collective expulsion of even innocent MPs and ministers – a tactic that has been used previously to enact “judicial coups” against democratically and legitimate governments.

Yet, as alluded to earlier in this article, voicing any dissent about this counter-democracy constitution is strictly forbidden. In fact, arrests of people voicing opposition to both the DemExit referendum process and the proposed constitution are already being conducted by the Thai Army. It’s clear that the Thai people are now held captive by the generals, forced to take part in a charade that attacks their own dignity and fundamental rights. The junta’s generals are now little more than prison guards, desperate to keep their unruly captives in line.

The Thai Army’s DemExit referendum is, without question, an attempt to permanently destroy Thailand’s struggle for democracy. Given the very severe penalties in place for those opposed to it we certainly can’t encourage anyone in Thailand to engage in such activity which would lead to their arrest

It is, however, incumbent on the diplomatic and international community to send the generals the strongest message possible and to begin to consider what other actions they can take against this authoritarian and anti-democrat regime. Shamefully, at the moment, President Obama and the US government – in marked contrast to statements on the UK’s Brexit EU vote – has been almost entirely silent on both the Thai junta’s DemExit referendum and the bogus constitution. We call for the Obama and the USA’s hypocritical position to change and for them and any other government committed to democracy to fully condemn Thailand’s DemExit diktat at the earliest opportunity. The Thai people deserve no less.