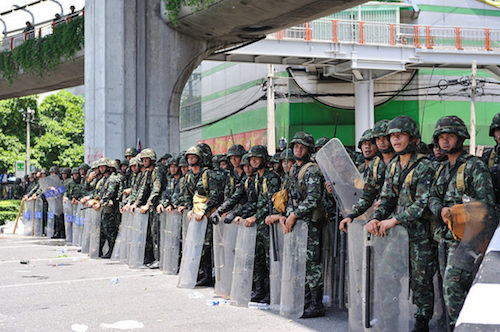 A friendly, caring nurse is tending some wounded people in a temple in Bangkok. Several have been shot, others are too traumatised to speak. Suddenly more shots crack out and Royal Thai Army bullets start raining down on the unarmed gathering. People start running in all directions, seeking cover. The nurse – a 25 year old single Thai woman known as Kamonked “Nurse Kate” Akkahad who is wearing a clearly identifiable red cross bib – is hit. She falls to the floor. She is shot again. And again. And again.

By the time the bullets stopped hitting her body and her life-force was spent, Kate had been shot several times by a Thai Army soldier firing from an elevated position. Later, beer cans were found at the spot the soldier fired from.

The most shocking thing from a legal perspective about Kate’s death is that we know pretty much who pulled the trigger and who ordered the soldier to pull the trigger. All the way up the chain of command. We know because there were respected journalists there reporting what they saw. We know because an undisputed paper trail leads back to Kate’s killers and those who ordered them. We know because there are dozens of eyewitnesses. Our diplomats from US, Canada, UK, Sweden, France, Germany and the rest of the world stationed in the Thai capital know. The global media’s representatives in Bangkok know. The killers themselves know.

Nurse Kate wasn’t the only unarmed civilian who was killed by the Thai Army in May 2010. Dozens more were executed in full view of an indifferent world. Thai Army snipers – trained and equipped by the US – were sent to shoot 16year old school boys in the head. This brutal crushing of Thailand’s pro-democracy Red Shirt movement in 2010 – something I personally witnessed when I visited the protest sites – was something organised by the Thai Army and their political allies in the Thai Democrat Party. There has never been accountability for these acts and the international community has never sought any such accountability. Sadly, this doesn’t look like it is going to change anytime soon.

So, when the tanks rolled three years ago on May 22nd 2014 to crush the democratically elected Yingluck Shinawatra led government, the generals and their royalist and elite backers knew that whilst the international community might cluck and wail a little nothing of note would be done to stop them. After all, it was only four years after they’d ordered the May 2010 killing of unarmed protesters and only eight years after the generals had staged a previous coup in 2006 and the world had barely blinked when both events had occurred. In the post-2014 coup months the tourists were still flowing onto the beaches and into the luxury spas, the US and EU were still selling them the weapons they needed and the de facto dictator and coup leader, General Prayuth Chan-ocha – who also helped organise the killings in 2010 – was still getting invites to meet world leaders.

So where is Thailand now three years after the coup?

Clearly, the corrupt and illegitimate generals are still ruling the roost and still hold sway over the Thai people through force of arms. This is completely unacceptable when any international norms are applied to the situation. Democracy has been suspended, dissent has been crushed and any expectation of matters improving seems impossible whilst these unelected generals are still in place.

Underlying this structural capture of Thailand by anti-democratic elements lies a wave of oppression that utterly condemns the aspirations of the Thai people with many arrests under Thailand’s appalling lese majeste law. These people now face decades in prison. Elections promised by the junta have failed to materialise with 2018 now being discussed as a possible timeframe – a timeframe which no seasoned analyst of Thai affairs takes seriously. The reasons for the delay in a return to democracy are obvious. The generals know that if they have to face Thai voters they will be roundly rejected – in effect, democracy remains their number one enemy.

The Thai Army – who have directly owned parts of the Thai media for decades – have also stepped up their “brainwashing” efforts. Dissenters are sent for Orwellian “attitude adjustment” with the media spewing out an endless volume of pro-Army and pro-elite propaganda. Questioning such output can lead not only to interest from the military authorities but can also lead to a variety of “social sanctions” such as online hate campaigns, sacking from the work place and even expulsion from university for students. All this approved by a completely unelected military government headed by despotic blood-soaked thugs.

Add into this the international community’s explicit backing – new US President Donald Trump has recently said he’ll be inviting Thai junta leader, General Prayuth to the White House – and it is easy to see how Thailand’s junta are likely to think that their impunity will continue.

What can be done?

The recent situation regarding the Gambian election and and the intervention by the Economic Community of West African States (ECOWAS) reveals that where there is the will to act and the various pro-democracy actors – in concert with the international community – can reach agreement on a coherent plan on a way forward, then democracy can return. In Gambia the outgoing dictator, Jammeh, refused to relinquish office after losing an election – ECOWAS, with the backing of the UN, threatened action and the despot crumbled.

In Thailand, the situation has been muddied by the lack of coherent leadership from the pro-democracy movement. The last democratically elected Prime Minister was Yingluck Shinawatra. Whilst she certainly appears reluctant to lead any pro-democracy movement — due in main to the extreme repression unleashed by the Thai military – she could still be considered as the last legitimate head of the Thai government.

In addition, the Thai military, with their allies in Thai royalist circles and the bureaucracy and with continued support from many of the nation’s wealthiest families, have a very firm grip over almost all aspects of the state. Most members of Thailand’s Red Shirts now rightly fear for their safety and lives if they attempt to organise any opposition, lawyers and other activists are targeted with arrests and sometimes torture and the vicious lese majeste law – complete with 15year prison terms – is the weapon of choice for one of the most onerous censorship regimes on earth.

ASEAN – the regional economic bloc of SE Asian nations – has been completely mute on Thailand. The failure to protect democracy is indicative of ASEAN’s weakness and also the regional lack of commitment to democracy.

The wider international community remains either ineffectual or uninterested. The democratic rights of Thais are far down the list of priorities for the EU, the UK and certainly the US administrations even if platitudes are uttered from time to time. In keeping with this tone, the international media may issue the occasional report highlighting concerns but the representatives of that media based in Thailand are very much aware that they cannot report the entire truth or may be subject to arrest if they do. However, the media based outside the confines of Stalag Thailand could certainly draw greater attention to the plight of Thai democracy – the lack of this just mirrors the lack of will on behalf of the international community.

The broader failings, then, are explicit and can be laid out thus – the lack of coherent leadership of the pro-democracy movement mainly due to the state repression; the failure of ASEAN to act collectively to sustain international norms and protect democracy in their region; the abrogation of responsibility by the wider international community in the face of the 2014 coup d’etat and at other times when the Thai military have intervened against the will of the Thai people.

There is still hope and there are mechanisms by which Thailand’s situation can improve, not least through international pressure and the international legal system via the UN. However, without broad, sustained and serious support for their democracy the Thai people will continue to be let down by the world. It’s about time that changed so that, at least, there are no more victims like Nurse Kate in the future.