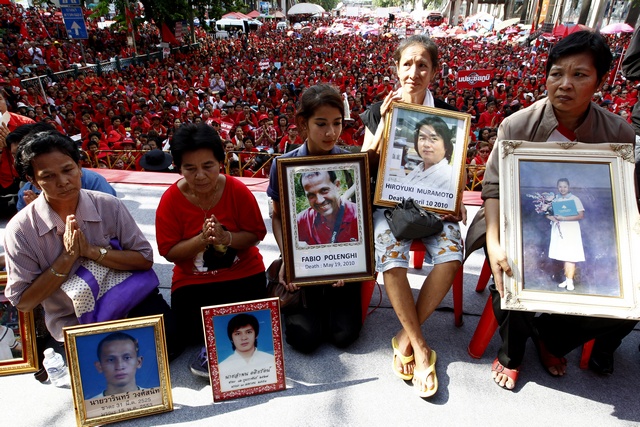 In the late 1960s and early 1970s the Thai Army were engaged in a fierce struggle with the Communist Party of Thailand (CPT) for control of the country. Vast swathes of the kingdom were under the jurisdiction of CPT cadres and the Thai military were using increasingly brutal tactics to regain their authority.

One of the Thai Army’s most brutal acts during their fight with the CPT was what is now known as the “Red Drum” massacre. Up to 3000 completely innocent Thai villagers were murdered in the most horrific and disturbing manner under the orders of the Thai military’s “Communist Suppression Operations Command” (CSOC).

Matthew Zipple in his paper “Thailand’s Red Drum Murders Through an Analysis of Declassified Documents” for the journal, the Southeast Review of Asian Studies (Vol 36 2014, pp 91-111) recounts the horror of the massacre thus:

“Sources… describe different execution methods. Some state that villagers were placed inside of a single red oil drum and had gasoline poured on them and lit on fire (Peagam 1975, 22; Dennis 1982, 130; Haberkorn 2013, 186). A second alleged method involved placing prisoners on a layer of logs, with another layer added on top of them. Soldiers then poured gasoline over the villager and set him ablaze (Dennis 1982, 143). Finally, another source describes a two-drum method in which victims were placed in an empty drum that had its bottom replaced with a metal grill. Soldiers placed a second drum, this one containing gasoline, underneath the first and set it alight. Other described execution methods include throwing victims from helicopters (Bangkok Post Special Publication 2003, 2) and shooting (Peagam 1975, 22). Again, all accounts agree that soldiers tortured civilians and executed them by burning them in drums.”

With the restoration of some semblance of democracy in Thailand in 1973, the Red Drum killings became a rallying point for those seeking justice and accountability. As Zipple describes, some efforts were made to hold Army officers to account for these monstrous crimes but such undertakings were thwarted by the Thai establishment, via the judiciary and civil service.

When Thailand’s brief experiment with democracy was squashed by a further Thai Army massacre at Thammasat University in 1976 and military rule was re-established by a coup in the same year, the Red Drum killings were forgotten and almost entirely air-brushed out of Thai history. No-one ever stood trial, nor were any formal investigations conducted or court cases held. Up to 3000 Thai citizens had their lives snuffed out by their own army and were then forgotten.

As we approach the May 19th 5th Anniversary of the Bangkok Massacre – when 100 unarmed civilians were shot down by the Thai Army on the streets of the Thai capital – every effort is being made by Thailand’s illegitimate and criminal military junta to forget the very killings they perpetrated.

Just recently, at a court hearing related to the death of Reuters’ cameraman Hiro Muramoto during the April 10th 2010 Thai Army attack on pro-democracy protesters which led to the death of 24 people, the then director of the National Security Council, Thawil Pliensri, denied there had been any kind of “crackdown.” He added that “There was no use of force or crackdown on the protestors… What happened on April 10, 2010 was an effort to return the area to traffic.”

In other developments that point towards an ongoing Thai junta cover-up for the 2010 Bangkok Massacre, the Thai press reported that the civilian Division of Special Investigation (DSI), who were originally tasked with investigating the 2010 killings, have been forced to take on “military representatives” who will “assist with the investigation”.

Or, in other words, the investigation is now being “weaponised” by the military in order to cover up crimes that Thai dictator, General Prayuth, claims didn’t even take place.

And it doesn’t end there – even in death the Thai Army seek to maintain control over their own citizens. In what could only be described as an outrageous move by the junta, Thailand’s military rulers directly snubbed the families of the victims of 2010 and prevented them – under threat of arrest – from staging commemoration events to honour their dead.

We say to those families prevented from grieving we stand by you and we won’t forget.

We will be stepping up our efforts in the coming days and weeks to expose the Thai Army’s lies and to make sure that those killed in 2010 are not forgotten in the way the victims of the Red Drum killings were.

We will be making sure that the Thai Army’s attempts to control the past are contested and, ultimately, curtailed. We will not let them control the future unopposed.