Thailand’s Theatre of the Absurd 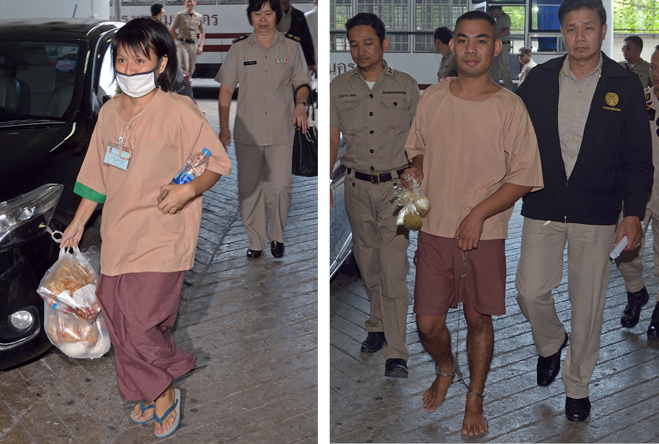 The sentencing this week of a 23-year-old student actor and a 26-year-old theatre producer to serve two and a half years in prison marks yet another low point in the slow motion car crash that is Thai politics under the military junta.

Patiwat (“Bank”) Saraiyaem and Porntip (“Golf”) Mankong could hardly be considered any sort of political threat to the coup government – in fact, they are probably feeling relieved and grateful for mercy after the judge reduced their sentences by half following their confession on lèse majesté charges.

It seems awkward, in fact, to use legal terms such as “sentence” and “conviction,” as it implies a normal judicial process with rights to defense which in reality simply no longer exists in Thailand. These two artists are not prisoners – they join the ever-growing list of hostages held by an illegal occupying force calling itself the National Council for Peace and Order.

Their alleged “crime” to merit this severe punishment was the one-time production of a play, The Wolf Bride, a satire set in a fictional kingdom which in part commemorated two student uprisings at Thammasat University in the 1970s. The junta is still hunting down six more people they believe were “involved” in the play – even if all they did was operate lights or help build sets.

Some observers have noted that a pronounced spike in 112 cases is a sign of panic among the leadership. In his invaluable study on the subject, Dr. David Streckfuss writes that “The cleavages in Thai society – class, race, ethnic, religious, regional, and political – so long papered over and held together by incessant calls for unity and a century-old construction of an ossified national identity – are no longer deniable or manageable. The linchpin is the lèse majesté law. The law’s use does not indicate the strength of the Thai state but rather its utter desperation.”

For the coup to crack down on a small student play like The Wolf Bride is to deny Thai citizens the opportunity to confront and reconcile difficult periods of the nation’s own history, even abstractly through art, fiction, and theatre. It is a clear sign that Prayuth and co. do not actually believe in their own legitimacy, to the point that they feel threatened by the idea that people attending such a production could entertain the possibility of independent thought.

Of course confidence and legitimacy in the coup government really hasn’t been seriously entertained ever since Prayuth boasted that he had the power to have people “executed by firing squad” and that he is banning any polling that may create a negative image of the junta.

The sentencing of Bank and Golf came just one day before the coup-appointed National Anti-Corruption Commission (NACC) made the preposterous announcement that 250 former elected members of parliament should be indicted and banned from politics for five years, which follows upon the indictment and charges filed against the elected former Prime Minister Yingluck Shinawatra.

Making matters worse, five days ago the coup-appointed National Legislative Assembly approved an amendment to the 1955 Statute of the Military Court Act that includes a radical expansion of powers, such as the ability of local military commanders to detain civilians for up to 84 days without charge or judicial oversight. The absorption of the civilian court system by military courts represents a staggering violation of the most basic rights provisions under international law.

The latest wave of aggressive repressions by the military junta may seem like déjà vu from the aftermath of the 2006 coup, but there is much more at stake. Coup leader General Prayuth Chan-ocha is making a very clear political statement with these LM convictions, widespread indictments, and reorganization of the nation’s entire legal structure. It is a show of strength, a demonstration of intolerance, and an exercise of bottomless impunity. The junta is beginning to outline it’s future vision of how Thailand will work, and it is frightening.

They are not only willing to exclude and disenfranchise some 16 million citizens who have come out to vote against military-aligned political parties in recent elections, but also seeking to recast history in a way that makes their very existence as citizens a matter of question. What can dialogue can exist when the military leadership expects more than half of the nation to live as feudal subjects?

Consequences must be imposed upon the coup leadership to make them think twice about what they can get away with. Individual targeted sanctions, asset freezes, visa bans, and other curtailments of international privileges are needed urgently to send a message to the generals that their actions are not only unacceptable in the 21st century, but may include personal criminal liability in the very near future.