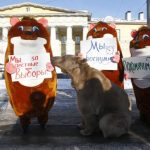 Putin’s pre-election circus is becoming increasingly grotesque, with his supporters attacking free speech on all sides in a bid to secure a criticism-free zone for the Prime Minister ahead of the presidential elections that he will win next month.  A political discussion show on the Russian arm of the MTV music channel has been pulled after just one episode, and ahead of a planned appearance by Alexei Navalny – a move which indicates the Kremlin’s fear of Navanly’s popularity and impact for a young, savvy and forward-thinking generation of Russians.  And which also proves Navalny’s assertion that ‘Putin puts all his faith in television.’  And in other news which sent listeners into panic, the editor and deputy of Ekho Moskvy radio station are leaving their posts, after the station’s owner, Gazprom, called for a board reshuffling.  That this move was conducted well ahead of the board meeting scheduled for June is enough indication that something fishy is going on.  But the fact that it’s happened just weeks before the elections, when criticism of Vladimir Putin is at unprecedented levels, should make it 100% clear.  Here’s the Washington Post:

During a public face-to-face meeting in December, Putin complained to Venediktov that the radio station pours excrement on him day and night. (He used a coarse word that doesn’t have an exact equivalent in English slang.) He was especially incensed at a report that talked positively about the proposed U.S. missile defense shield, a sore point in relations between Washington and Moscow.

Shortly thereafter, the station said Tuesday, Gazprom demanded the changes. Venediktov said in a tweet that he was positive the move was political but that Putin himself did not order the shake-up. More likely, this was a case of Gazprom taking its cue from Putin’s public comment to Venediktov and moving on its own in an effort to anticipate the prime minister’s wishes. Much the same thing appears to have happened in December when the owner of Kommersant Vlast magazine, Alisher Usmanov, fired two top editors over a cover photo of Putin.

Sergei Mitrokhin, a leader of the opposition Yabloko party, said the motivation was clearly political. “Apparently, Putin’s power system is being restored and strengthened,” he told the Interfax news agency. “Most likely, from Putin and his team’s point of view, Ekho Moskvy went beyond the limits set for mass media in this system. It is a signal to tighten the bolts.”