The Contradictions of Contemporary Soviet Modernisation 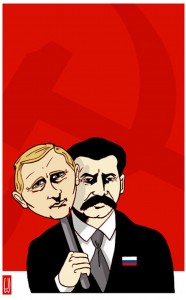 It has now been 21 years since the end of the Soviet Union, but Stalin’s policies still appear to have a strong hold over the country’s leader.  Two separate articles this week have picked up on this, analysing contemporary Putinism’s affiliations with Soviet Stalinism.  The grounds for comparison were laid by Vladimir Putin himself last month at the Battle of Borodino re-enactment where the President, whilst not mentioning Stalin by name, called for Russia to ‘carry out the same powerful, all-embracing leap forward in modernisation of the defence industry as the one carried out in the 1930s [by Stalin]‘.  Sergei Shelin says that current trends in military spending, and economic policy more broadly, ‘bring about the same sensations as one gets from watching an old newsreel‘, comparing the following two quotes from Stalin and Putin respectively:

“The slogan ‘the cadres decide everything’ demands that our leaders show the utmost concern for workers, for the ‘little ones’ and ‘big ones’…raise them, move them up and forward…” (Stalin)

“A word or two about cadres: it’s an extremely important question, and at all levels, at that – beginning with the rank-and-file worker and engineering cadres up through those of the company managers… We’ve done a lot to upgrade the working cadres, but if it hasn’t been enough, we’ll continue this work…” (Putin)

But, he notes, a key feature of Putinism is ‘monopolization […] imposed with ferocity‘, meaning that the key driver of Stalin’s modernisation, i.e. competition, is absent in contemporary Russia.  He suggests that Putin should be doing the exact opposite of Stalinist modernisation, but that Russian society perhaps needs to ‘mature‘ before this can happen.  James Rodgers in the New Statesman takes a similar line, marking the birth of modern Russia as the end of the Soviet Union 21 years ago, and arguing that Russia still ‘has not decided what it stands for‘, likening it to ‘the 21-year-old who has put away some childish things, but not abandoned adolescent uncertainty‘.

Like Shelin, Alexander Golts in the Moscow Times today also compares Putin and Stalin’s comments on modernisation of the defence industry.  There are a number of problems with Putin’s emphasis here, he says.  Firstly, there is a complete disconnection of context.  ‘[S]ince the 1980s, the civilian sector, not the ­­military-­industrial complex, has been the driving force behind the world’s leading economies, as well as the source of the greatest technological breakthroughs, combined with an inefficient cost system inflated by the bureaucracy of producing weapons through a state-run organ.‘  And further to this, the current structure of state-run corporations (like Russian Technologies) mean that the cost of weapons is inflated and inefficient, because the corporations are ‘forced to maintain enormously bloated bureaucratic structures, the cost of which is reflected in the price of their end products‘.
Do these anachronisms simply amount to the Kremlin’s ‘romantic nostalgia for those past times‘, as Shelin puts it?  Or does Putin believe that a modernised defence industry will give Russia more political clout as a key player in the Asia Pacific?