The Golden Rule Of Dealing With Putin 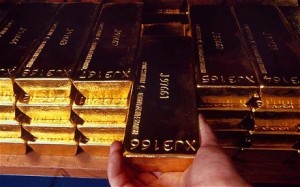 It seems that Vladimir Putin has not finished with Mikhail Prokhorov just yet.  The tycoon, who briefly led the Right Cause ‘opposition party’ and fell foul of the Kremlin by calling untouchable strategist Vladislav Surkov a ‘puppet master’, has learned the hard way that if your foray into politics does not end happily for the Kremlin, there will be a price to pay.  In what one Troika dialog analyst described as a ‘surprising move’, Prokhorov’s gold miner, Polyus Gold, has been refused permission to list on the prestigious London stock exchange (at least for the moment ) by the body that approves foreign investments, led by none other than Vladimir Putin.  Reuters considers how badly the delay will affect the miner’s prospects:

While Britain’s relationship with Russia has been rocky in recent years, London’s draw is more powerful than ever for Russian businessmen who seek capital, prestige and a haven from the rough and tumble of their home country’s business world.
“When you’re worth $10 billion you are probably less focused on getting to the next $20 billion — you’re probably thinking: ‘How do I preserve what I have?'” said one senior banker.

“You would naturally take all steps to diversify your wealth and your exposure away from one geography that you know is going to be volatile, at least for the next generation.”

A hold-up for Polyus could allow two rival Russian miners to beat it to coveted spots in the FTSE 100 index, gaining access to a wider pool of investors and creating an acquisition currency just as the sector undergoes global consolidation.

A step on the road to the FTSE is a change of domicile — effectively moving firms to Britain, where Russian tycoons often make their homes, educate their children and seek legal redress when unpredictable Russian justice fails them.

“They are trying to find a way to access capital markets when all the markets have gone down,” said a source involved in one company’s FTSE move. “Where can you get some lift for your share price? You put UK Plc at the top.”