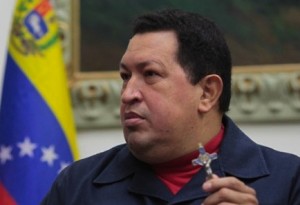 Now you see him, now you don’t.  That seems to be the story out of Venezuela this week right as the 23 states brace for the December 16 governorship elections.

While I find it immoral to wish ill health on any person, it is difficult not to get wrapped up in the speculative drama surrounding the current status of Venezuela’s President Hugo Chávez, whose increasingly mysterious trips to Havana have many people worried about the inevitable scramble for power that would be left in the vacuum.

Following more than three weeks of near-total silence as he received cancer treatment in Cuba, Chávez suddenly reappeared in Venezuela this past Friday to spent ten minutes boasting in front of TV cameras, oddly enough talking about poetry.  But it wasn’t to last for long.

Turns out that after appointing his VP Nicolás Maduro as the official “successor,” as well as swearing in the new Minister of Defense Diego Molero Bellavia, Chávez hopped right back on a plane out of the country.  There may be days, weeks, or even months of Chávez governing Venezuela via Twitter and pre-recorded video messages, but essentially the consensus view among experts is that we are witnessing the final days of the 14-year rule of Latin America’s longest serving current head of state.

Since his vague announcement in June 2011 that he was suffering from a non-specific form of cancer, Chávez has never talked about the issue of successors, never mentioned the possibility of stepping down to address his health concerns, and appears to have given little strategic thought to what will happen to the country after his final day in office.  As such, his anointment of Maduro comes off as improvised and unlikely to convince the many other chavista officials from competing for power, not to mention the state of play of Venezuela’s long-suffering opposition.

It would be a mistake to assume that Chávez’s departure is unambiguously good news for the country.  It’s only by miracle or dumb luck that his latest bout of poor health is happening now and now two months ago, when Chávez’s formidable PSUV political machine throttled Henrique Capriles Radonski despite an unusually well articulated campaign.

But after 14 years of misrule, Venezuela is hanging by a string.  The crime rate is Caracas is staggering.  The capital metropolitan area notched no fewer than 3,218 homicides in the first ten months of 2012.  Numerous government officials have well established ties to narco-trafficking groups. Human rights abuses have been selective but deeply cruel (just look at what they have done to Maria Lourdes Afiuni).  Price controls and artificial exchange rates have barely kept a lid on soaring inflation and rising food costs, while a steep currency devaluation and increase in the price of fuel are long overdue.  The last time that a Venezuelan government attempted to dramatically change the fuel subsidy, we had the Caracazo riots of 1989 and some 3,000 deaths, which is credited in part for laying down the social conditions that led to the rise of Chávez.  No matter who clings to power after the president is gone, they will have to face the reality of some form of these difficult policies.

Venezuela can’t technically copy the Fidel model, and just hand the reins over to Adnan Chávez (or Maduro).  Article 233 of the Constitution states that if Chávez is unable to stay in office before his Jan. 10 inauguration, snap elections would have to be called within 30 days, while Maduro would be acting president until that time.  The only way Chávez can pass power to Maduro would be if he left office within the last two years of his of term.  Of course, this is all assuming that the chavistas would follow the letter of the law.

Writing at Caracas Chronicles, journalist Francisco Toro points out the dangers of the post-Chávez vacuum, as the successor may not be as careful as Chávez to observe the minimal restraints that would keep Venezuela was plunging into a full blown police state.  “The upper reaches of the chavista governing elite are top-heavy with narco-drenched gangland types, and they won’t even have a controlling figure standing over them to keep the inevitable tensions between them from escalating out of control,” Toro writes.

In a completely unrelated article in the Financial Times on the recent clan wars among Russia’s elite, Kirill Rogov is quoted as saying “When the power in any political system weakens, then competition for that power increases. We are facing a time of turbulence.”  The same could be said of Venezuela.

Like Putin, Chávez has constructed a system in which he is needed as an arbiter.  The bureaucracy is loaded with ideologically driven PSUV ministers each counting on discretionary access to generous budgets, while the military and security apparatus features a number of ambitious figures whose ideas of civil-military relations are far from modern.  There is not a single political figure within the regime that can claim a broad support base across the party, but there are a number of people likely to come forward to challenge Maduro, namely Diosdado Cabello, who like Igor Sechin in Russia has made millions off his time in government and commands a powerful network of ministers turned businessmen.  You also have Elias Jaua, who is currently running for governor in the wealthy opposition stronghold of Miranda.

The true test to see whether the opposition can take advantage of the president’s absence will be tested on December 16.  If they are able to win governorships in several key swing states, the entire composition of the state may be impacted, giving them an extra edge if Article 233 is invoked.  However Chávez leaves behind a formidable political machine and longstanding patron-client relationships among key communities that has helped them consistently win elections in the past.  It will be fascinating – and frightening – to see how intense the fighting may become among the chavista factions if el jefe is removed from the equation sooner than expected.