The Madness of Dissent 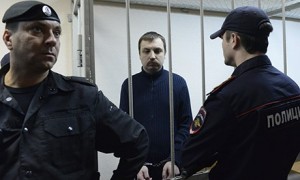 But the “crazy” cuts both ways. In a disturbing imitation of Soviet practices, one of the Bolotnaya Square protesters, Mikhail Kosenko, was recently sentenced by a court to be committed against his will for punitive psychiatric care, with the clear message being sent to any other young people in Russia feeling rebellious: dissent is not only ill-advised, dangerous, but also literally “crazy.”

The concept was extended with the overly harsh treatment of the Greenpeace activists and the charges of “piracy” – and these are people who clearly want nothing more than to just go home and never return again.

The following article is quick translation of an editorial published in the Russian newspaper Vedomosti on a subject that has revived fears of just how far the current leadership is willing to go in order to clamp down on protesters. The first convictions of the Bolotnaya detainees are seen as a “test” of the public’s reaction. Judging by the world’s apathy to these non-celebrity, non-punk rock nor popular leadership figures, we can only assume the worst – that the Kremlin will believe they can do whatever they want with them without penalty. Hopefully people start waking up to the gravity of this case.

Yesterday’s verdict to Mikhail Kosenko is socially significant. This is the third sentence in the case of the so-called Bolotnaya square, and the first in which the accused pleaded not guilty and refused to cooperate with the investigation.

The case of Kosenko was separated from the rest due to mental illness of the defendant. According to observers, these kinds of trials, taking place prior to the bulk cases, are designed to test the public’s reaction to the allegations in this show trial.

Show trials always require special sensitivity from the authorities. To achieve the goal, which is to intimidate dissidents, the position of Justice should look, at least, psychologically convincing, and the defendant should not cause undue sympathy. If both of these conditions are not met, then the problems begin. The boundary separating the public sympathy to the court from the sympathy to the defendant is mobile and depends on a variety of objective and subjective factors. Its shift can turn an example to deter to an example to follow. Ability to see the border, to feel the mood in the community is one of the most important skills that make up the art of politics.

Attention from this trial was distracted by such resonant stories as the Krivoles trial, Moscow mayoral elections, Tolokonnikova’s letter from prison and detention of Greenpeace activists. But even under these conditions and with little public sympathy to the participants of the ” disorder”, every new episode related to Bolotnaya prisoners – be it a wedding or the refusal of their medical care –romanticizes them and serves as a sign of their glorification rather than an example of how dangerous it is to take part in street protests.

Kosenko’s verdict, especially against the background of the recent ban to attend the funeral of his mother and the bright and convincing last speech, looks more like an evidence of insanity of the investigation, rather than of the accused.

With such examples, it is appropriate to say that the government, without any help, works effectively to discredit itself. The investigation speaks more clearly to citizens: Bolotnaya prisoners are the usual, most probably, innocent people and everyone could be in their place.

The abuse of psychiatry for political purposes has a long history in Russia. The first well-known “lunatic” was Peter Chaadaev, put under the house arrest and under the supervision of a physician for “stout nonsense”. Some other victims of punitive psychiatry were Vladimir Bukovsky, Natalia Gorbanevskaya, Mikhail Shemyakin. Kosenko has a good company, but it is, alas, of a little comfort.