Throwing the Medved to the Wolves 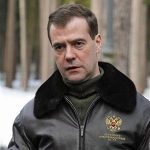 As this week ends, so the sun sets on the presidency of Dmitry Medvedev.  A plethora of articles have surfaced this week analyzing his legacy, most of which read rather like a litany of disappointments.  This one from the New York Times considers how the lawyer will fare as Prime Minister and as head of United Russia.  Will he find his way through the political wilderness?

Indeed, Mr. Putin has given Mr. Medvedev somewhat more leverage by putting him in charge of United Russia, which is losing popularity but still holds the majority of seats in Parliament. Some experts point out that as a progressive governing partner, Mr. Medvedev now looks stronger than internal rivals like Mr. Kudrin or Deputy Prime Minister Igor I. Shuvalov.

Nevertheless, he is heading without a large team of supporters into an environment where, as Mr. Putin once put it, “the weak get beaten.”

“I would not call it a tragedy,” said Aleksei V. Makarkin, an analyst with the Center for Political Technologies, noting that Mr. Medvedev could never have become president four years ago if he had not been selected by Mr. Putin, who was so popular that voters would have approved virtually any successor.

“I don’t know for sure, but it’s possible they would have voted for Koni,” Mr. Putin’s black Labrador, Mr. Makarkin said. “It would be a tragedy if a person achieved it himself and it was taken from him. This is something else, I don’t know what the word is.”