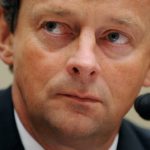 It has been reported today that ex-BP CEO Tony Hayward, at the helm of new investment vehicle Vallares, is eyeing up stakes in Sistema-owned oil producers Russneft and Bashneft, in what one reporter has called ‘a blockbuster bid’. Russia’s Arctic seems to retain the incontrovertible appeal of an El Dorado for BP’s 21st century oil men, having previously attracted the attention of current CEO Bob Dudley, despite the numerous labyrinthine legal challenges that entering the region, or Russia full stop, poses.  John Helmer from Dances With Bears argues why Tony Hayward has little reason to imagine he will restore his tarnished reputation with these particular Russian prospects:

Look again – they are claiming that Hayward, Rothschild and the Vallares shareholders believe they can borrow against their capital pot of £1.3 billion, paying roughly six times that amount for £8 billion in Russian asset value. A report by oil analyst Alexei Kokin of Uralsib Bank suggests the arithmetic is wishful. “Sistema owns 86% of the common shares and 73% of the capital in Bashneft (together with Sistema-Invest) and 49% of Russneft. The deal could create a Russia-based oil company with proven reserves of about 2 bln bbl and a production rate of above 550,000 bpd. Total value of the stakes could be $9.5 bln [£5.9 billion]. Bashneft’s total market cap is $11 mln (ords and prefs), with Sistema’s stake (including Sistema Invest) worth $8 bln at Friday’s closing price [[£5 billion]. We believe the value of 49% in Russneft should not exceed $1.5 bln under the most aggressive valuation assumptions.” Russneft’s burden is its estimated $6 billion in debt. Two-thirds of that are owed to Sberbank. One-third of the debt is owed to recently listed Glencore; Hayward sits as a “senior independent non-executive director” on the Glencore board.

But there is a problem that Murdoch-style hacking and bribery of government officials might have uncovered, if only Kleinman had given them a try. He might have discovered that the purported Russian targets of Hayward and Rothschild have no intention of selling, and that even if the thought had crossed their minds, the Deputy Prime Minister in charge of the oil sector, Igor Sechin, and the Control Commission, chaired by Prime Minister Vladimir Putin, have not signaled in advance their intention to allow a foreign acquisition of this size.