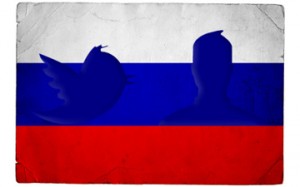 One of the many threads to emerge from the dramatic events of last week is the ascendant role of social media. It was widely publicized last week that, prior to the protest rally in Moscow on Saturday, a Facebook group attracted 20,000 names who pledged their presence.  Equally, the ruling party have found it harder to deny allegations of ballot stuffing when the Internet is awash with images that seem to depict election fraud, images that can all too easily be captured in the era of the smart phone.  It is necessary to point out, however, that there is no guarantee that increased use of social media directly correlates with increased protest on the street.  Another ambivalence surrounding the increased use of social media is the fact that the power vertical may yet prove as willing to engage with it as the opposition movement.  United Russia now has its own (albeit entirely redundant) Facebook group for ‘free elections’.   Luke Allnut, RFE/RL’s resident digital activism expert from the Tangled Web blog dissects these important strands:

[…] by using Facebook to address the protesters and by allowing them to vent online, the Russian authorities are trying to take the steam out of the protests. Rather than bureaucrats bumbling their way through social media, taking on kids with iPads and livestreams, they appear to be more than aware of the depth of the crisis and are deliberately using social media as a considered and measured response.

(In another tactic targeting social media, spam has also been used to drown out chat on Twitter.)

The concept of “slacktivism,” where physical protests can be diminished by ineffectual activity online, and the relationship between online rhetoric and street-level political activism is still poorly understood. (In Arab Spring protests, for example, research has shown that social-networking sites could both push people out onto the streets and keep them at home.)

But for a regime under pressure, addressing some of your key constituents (many of them middle-class and tech-savvy) on one of their key platforms, Facebook, and allowing them to vent seems to be a savvy way of tweaking the release valves. It presents the impression at least that the Russian authorities are listening to the people’s concerns. The Kremlin has always been as concerned with narrative-shaping as it has been with crude censorship.

In the immediate term, using Facebook is entirely consistent with other tactics the regime is using to tamp down the pressure, in particular the unprecedented decision for state media to offer up relatively straight-up news coverage of the protests, a good example of when the power of social media makes protests too big to ignore.

In the long term, addressing Russian citizens on Facebook and allowing them to respond is consistent with the government’s view of the Internet as a facilitator of “direct democracy” in Russia, as opposed to Western democracy with all of its tiresome emphasis on the rule of law.