US Says Yes To Magnitsky Sanctions 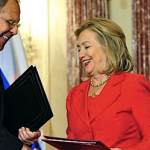 Today emerged the news that the US state department has imposed sanctions against officials who are suspected of involvement in the death of Hermitage lawyer Sergei Magnitsky.  The sanctions, which were first proposed by Senator Benjamin Cardin in spring of last year, would see around sixty officials, including judges and interior ministry officials, refused visas to the US.  Although it has been noted that the US hardly screamed the announcement from the rooftops, it is nonetheless gratifying to see a stand being taken on the case, especially given the apparent stakes involved (as the state department memo points out, Russia has ‘said that other areas of bilateral co-operation, including on transit to Afghanistan, could be jeopardised if this legislation passes’.)  The international community has often been taxed with turning a blind eye to Russia’s human rights abuses; Angela Merkel’s recent amicable meeting with President Medvedev drew attention to this problem.  EU Observer reports on Hermitage founder Bill Browder’s reaction and how Europe might follow Washington’s example:

“It’s a very smart solution because it targets the real perpetrators and not the whole country,” she said. “The time has come for new [EU] targeted sanctions on the American model – it could also be a low-key solution, put in place by one of the Schengen countries.”

Under the rules of the EU’s passport-free Schengen zone – which covers 22 EU countries plus Iceland, Norway and Switzerland – if any one member state red-flags a name all 25 must refuse that person a visa.

EU governments regularly complain to Russia about lack of results in the Magnitsky investigation. But they are wary of taking action.

Dutch foreign minister Uri Rosenthal earlier this month refused to ban the group-of-60 despite a unanimous vote by all 150 MPs in the lower house urging him to do so.

The EEAS on Tuesday (26 July) did not respond to EU Observer’s query about the US development. But EU officials previously told this website it would be unrealistic to “consistently” ban foreign nationals involved in high-level corruption or murders.

For his part, Bill Browder, Magnitsky’s former employer, said: “It is a major precedent to create sanctions against human rights abusers from countries with [which you have] normal diplomatic relations. If this had been in place before, you wouldn’t have seen the Western-approved excesses that led to revolutions in places like Egypt and Tunisia.”

Magnitsky, a 37-year-old father-of-two, died in jail in 2009 when his abdominal membrane burst because he was denied medication for pancreatitis.