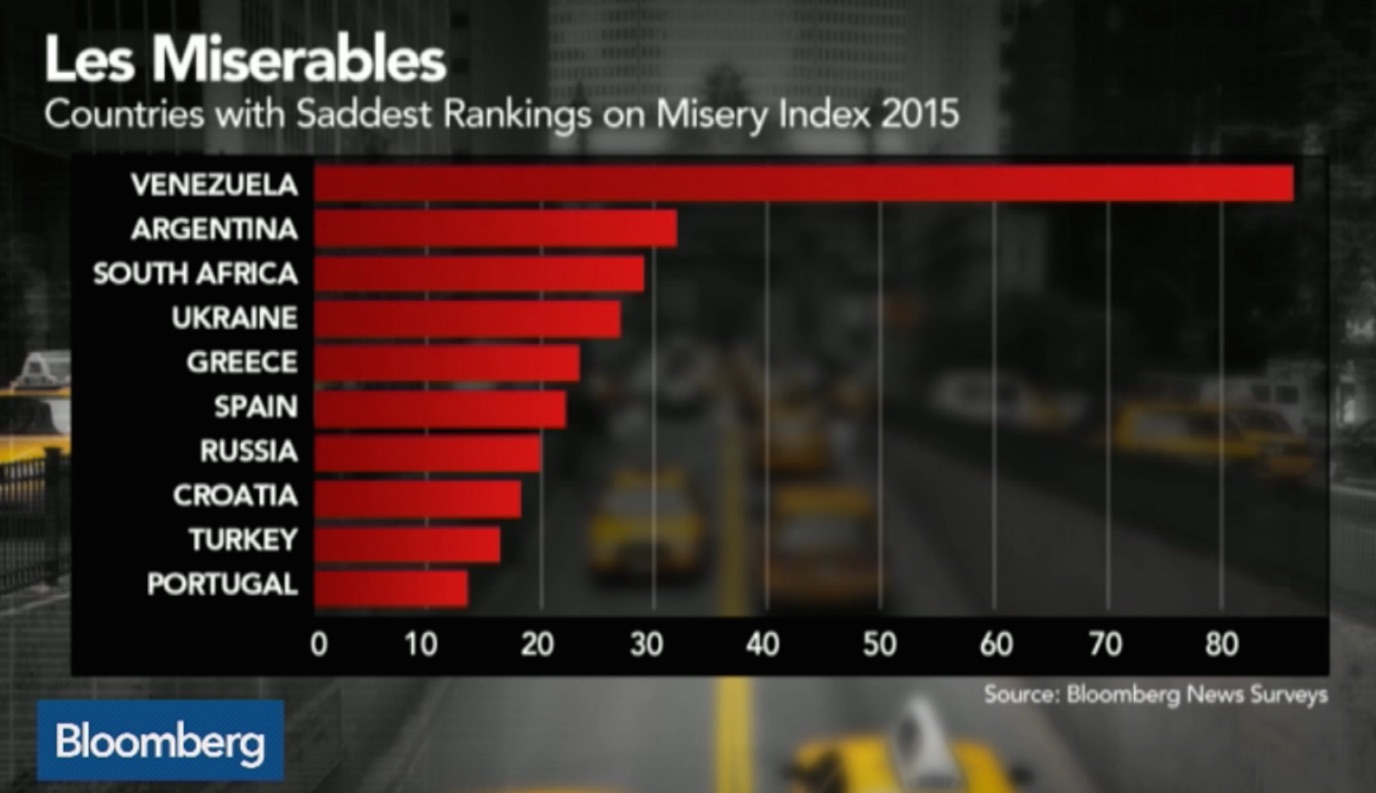 Not that many people are paying attention outside of the region, but Venezuela is quickly approaching the precipice of disaster.

At 68% inflation, the country ranks among the worst performing economies in the world outside of Sudan. Unemployment, debt, unchecked violence and insecurity, and widespread shortages of basic goods ($755 condoms) are drawing comparisons with the worst of Soviet times. Bloomberg just named Venezuela #1 in its “Misery Index” for 2015, and second place was nowhere close. Even war-torn Ukraine isn’t doing quite as badly.

With no new ideas on how to fix the economic crisis (problem being that Hugo Chávez failed to stock the stabilization fund during the boom years), the fabulously incompetent administration of President Nicolás Maduro has resorted to time-tested tactic of polarization, provoking the opposition by jailing a number of its leaders, including Caracas Mayor Antonio Ledezma on sedition charges with virtually no evidence.

Although there is probably an element of crisis fatigue when it comes to Venezuela (the country has veered from one emergency into another since 2002), we should be paying close attention to what Maduro does next, as he appears to be testing out a new blueprint for repressive states to completely eliminate the possibility of political opposition while at the same time continue to ape the appearance of a democratic state.

Back in 2007-2009, I was involved in the legal defense team of a Venezuelan political prisoner, Eligio Cedeño, who now lives in exile. At time, we had prepared a White Paper examining all the legal flaws in the state’s case against him, making the argument that the judiciary under the influence of the presidency is used as a weapon to repress lawful political opposition.

A lot has changed in Venezuela in the past seven years, but the core flaws in the legal system remain. In the conclusion of the paper we wrote that “patterns of judicial attack include: (1) official condemnation in the media; (2) false criminal charges; (3) controlled assignment of sensitive cases to pliable judges; (4) persistent and flagrant due process violations; (5) prosecutorial misconduct; (6) manifestly erroneous court rulings; and (7) executive interference with undesirable decisions by the judiciary.”

Judging by the handling of the current cases against opposition leaders Ledezma, Leopoldo Lopez, Daniel Ceballos, Vicenzo Scarano, and Maria Corina Machado, among others, President Maduro has continued fulfilling the same model of the weaponised judiciary as established by his predecessor, albeit quite a bit more recklessly.

The Ledezma example alone is outstanding – he was arrested by riot officers at gunpoint without a warrant, and then brought up on the charges of conspiracy and racketeering, which both have a very high threshold for evidence. The state’s case, however, is based on Ledezma signing a completely innocuous letter devoid of any language of “coups.”

A recent story in the Miami Herald from a few weeks ago quotes experts on the rapid decay of rule of law in Venezuela:

“Political influence over the courts has always existed, but now it’s very apparent — there’s not even an attempt to hide it,” said Yvett Lugo, president of the Caracas Bar Association. “Dissent in this country is being criminalized.”

“All of these cases are part of a sad and lamentable use of the justice system to neutralize political adversaries,” said Alberto Arteaga, a Central University of Venezuela criminal law professor. “It sends the message that anyone who acts as a political leader may face jail.”

What we have seen so far during this slow motion tragedy is that the Venezuelan government will become more and more oppressive as the economy continues to tighten, while at the same time portraying itself as a victim of an “international conspiracy.” Its tactics to eliminate political opponents are likely to be copied, both close to home and far abroad.

The question is, how much longer can Maduro pretend to be a besieged fortress when his opponents no longer exist? One senses that this story will not have a good ending.