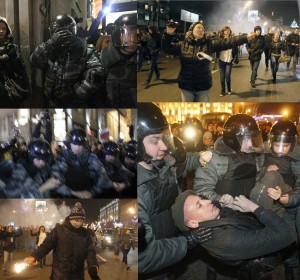 Soldiers have been sent into the streets of Moscow to deal with a second night of protesters attempting to rally in Triumfalnaya Square against the weekend’s election results in which United Russia, despite a litany of abuses of the electoral process, managed to scrape together 49% of the vote.  Protest slogans reportedly included ‘Putin is a crook and a thief!‘  Along with the troops, the FT also reports that 15,000 members of pro-Kremlin youth groups are being organised to stage counter-protests.  Hundreds of protesters have already been detained, and clashes between anti- and pro-Kremlin demonstrators have apparently seen both sides throwing flares.  The government, meanwhile, in the form of Dmitry Peskov, continues to toe its line about how ‘unauthorised protest‘ must be quashed, and President Dmitry Medvedev says that the hundreds of videos and reports of election fraud are not ‘incontestable proof‘ of fraud (i.e. effectively saying that proof is not proof).  The Financial Times draws the obvious link with the Arab Spring:

US senator John McCain, a leading critic of the Putin regime in the US Congress, tweeted provocatively on Tuesday: “Dear Vlad [prime minister Vladimir Putin], the Arab spring is coming to a neighbourhood near you”.