What Western Sanctions Say About Russia 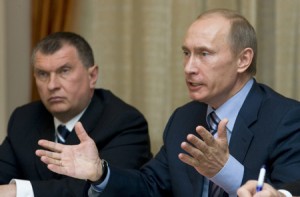 I am always wary when failure is declared long ahead of a completed attempt, but that has generally been the reaction to the latest rounds of expanded sanctions being applied to Russia by the U.S. government.

Many observers still believe these sanctions are too weak, either because they want to see a broader attack on Moscow’s energy exports or because they are urging capitulation (it’s just Ukraine, they argue in subtext, let Moscow have it and draw the line at the Baltics). But what’s interesting to me about the U.S. strategy to target specific individuals is what it says about how we understand Russia, and what sort of reactions we expect to certain measures.

The the lack of short-term results to this strategy, of course, is clear:

“These new sanctions don’t represent a full-throated financial campaign to punish Russia,” said Juan Zarate of CSIS. “Such measures will have some impact, but they are not likely to impose the types of costs that will change Moscow’s behavior in the short term.”

Thomas Graham, who has been rumored to have some ties to the Russian government, argues that it is economically impossible to isolate Russia, and as such, the Americans should focus on what he calls “calculated accommodation.”

Even a New York Times editorial, usually a fountain of support for the Obama administration’s foreign policy, drily complained that “such targeted penalties are not likely to change Russia’s behavior,” while calling for more “serious economic sanctions that hurt Russia’s financial, energy and military sectors.”

But to me this seems like a lot of crystal-ball gazing given that it is only Day 3 of the latest sanctions program, while the most common assumption of the objective – to get Putin to rollback on Crimea – is not really what they are going for.

Targeting individual oligarchic power inside Russia represents a highly specific diplomatic approach that is unique to the character of the Russian political system under Vladimir Putin (undoubtedly, the ideas from the Magnitsky Act paved the way toward this strategy).

The objective with Russia sanctions has nothing to do with the kinds of sanctions applied against other countries, such as Iran, Syria, or even the Central African Republic. Some of the traditional levers of influence do not work against the model of state Putin has built, while other routes to action are not applicable given Russia’s military projection.

The absence of independent actors within the state makes a huge difference. There can be no presumption of regularity in today’s Russia with regard to the functioning of institutions, and while although public opinion can sometimes have an impact if it occurs on a large national scale, the Kremlin has already shown an incredible effort to control the flow of propaganda to keep people in check.

So if no one is left within Putin’s inner circle to influence him, what remains important to him? The operating assumption is that the only things Putin cares about are 1) his money, 2) his power, and 3) his legacy.

Clearly, the U.S. administration is hoping to damage #2 by going after #1. Private property has not really existed in Russia since the Yukos affair, and what is held by many the country’s largest oligarchs represents, de facto, the tsar’s wallet. Putin’s power is based on this mutually supportive structure of property, corruption, and the absence of rule of law, and by applying sanctions that deprive Russia’s economic elites of their property and travel privileges beyond Putin’s arbitrary discretion throws a wrench right into the center of the state machinery – and that’s not an insignificant thing to consider.

The names added to the U.S. Treasury Department’s Office of Foreign Assets Control (OFAC) Specially Designated Nationals (SDN) list are meant to send a specific message to the Kremlin – an illustration of how the net can be expanded, tightened, or loosened toward very specific areas of the economy and power structure.

There are already some negative externalities appearing on the surface.

Deputy PM and unofficial court jester Dmitry Rogozin may enjoy a good joke about NASA needing a trampoline to get into space, but others see more problems with the U.S. cutting off high technology exports to Russia. The IMF has already slashed its growth forecasts for Russia’s GDP down to 0.2%, S&P cut Russia’s rating to one notch above junk, while the weakening ruble is causing food prices to shoot up dramatically (average price of potatoes up by 34.5%, cabbage by 46.5% and onions by 41.4%).

The latest sanctions are deeply concerning to the energy sector as well. BP owns a 19.75% stake in Rosneft, which they oddly found themselves compelled to buy while suffering a takeover within TNK-BP. ExxonMobil is all in with Mr. Sechin after their prized joint venture to drill for oil in the Arctic. The individual sanctions were seen as merciful (Rosneft shares actually gained), but the worry is what will come next and how much it will cost the energy super giants.

When people complain that these sanctions aren’t going to do anything right away, they are right. Putin is carrying an 82% approval rating – the highest in six years, according to new Levada poll. The propaganda machine is working in full steam generating lurid conspiracy theories of U.S. sponsored fascist coups in Kiev and WWII recollections of “country first, the citizen second” mentality.

I would agree with the observation shared by Steve LeVine that Putin’s wallet (Sechin) is not nearly as important to him as his pursuit of “historic glory.” In fact, some would go so far as to argue that money, for Putin, is really only accumulated because real power can’t exist without a sizable fortune in the system he created.

It seems by selecting the targeted individual sanctions, the administration is not looking for a short-term change of behaviour, but perhaps rather a measurement of what happens when you begin tinkering with the functioning of Putin’s state. It will be interesting to see what comes next.