Why Armenia is Rebelling against Putin 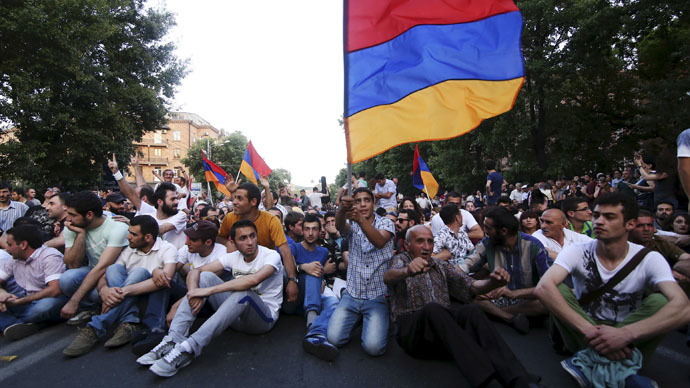 While the world’s attention is on Greece this week, a very interesting development is taking place in the usually sleeping capital of Armenia, as citizens are taking to the streets to protest against rising electricity prices brought about by a Russian state-owned company.

For years now, it is has been the policy of the Kremlin to lock down neighboring countries into aggressive energy deals, from pipelines to gas storage and distribution to electricity generation. The problem with having this kind of leverage is that there can be extraordinary political costs when market conditions don’t match the political imperative, you end up with deeply upset local populations protesting against the perceived abuses of Russia’s energy imperialism.

While the Russian state media is working hard to spin these protests into yet another ‘Western NGO conspiracy,’ the situation is quickly becoming concerning.

The protests began at the end of June after the government announced that electricity prices would be raised by 16 percent in August. The demonstrations often were referred to on social media as Electric Yerevan. After removing demonstrators today, Baghramian Avenue was reportedly reopened.

Demonstrations took a turn on June 24, when police used force in an attempt to break up the movement. Authorities fired water canons at the participants and arrested more than 200 people. Both police and demonstrators were reportedly injured during the clashes.

Following the controversial crackdown, Prime Minister Hovik Abrahamyan said demonstrators were violating the country’s constitution and that the government would not change its decision. He did, however, offer the possibility of providing compensation as relief for those unable to afford the price hike. President Serge Sarkisian also said Armenia would “bear the burden” of rate hikes for an unspecified length of time.

Electric Networks of Armenia — the nation’s power grid — requested the price increase. Much like other industrial interests in Armenia, the power grid is fully controlled by a Russian company, RAO UES. The power grid defended the request by claiming that overall losses were sparked by low profits and debt, RFE/RL reported.