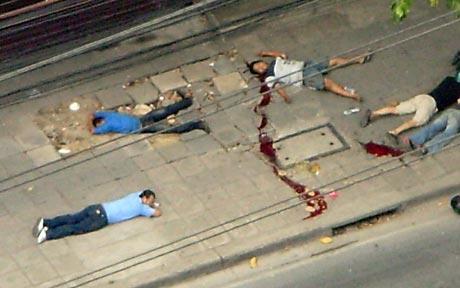 If there is one characteristic that defines Abhisit Vejjajiva’s baleful Democrat Party-led Thai government of 2008 to 2011, it is its shocking and callous disregard for human life during the Bangkok Massacre of 2010.

As my law firm has reiterated time and time again, setting highly trained snipers, equipped with the latest battlefield military hardware, against unarmed, civilian protesters – as Abhisit and the Thai Army did in April/May 2010 – is not only a crime against the Thai people but against humanity itself.

Yet it is not the just actions of the Thai Army and Abhisit in 2010 that cements their reputation as inflicting an injudicious, cold-hearted terror on their own people. It has also been their attempts to secure a false history of those terrible events, thereby denying not only justice and truth but any chance of genuine reconciliation for those who suffered at their hands.

In the last few days the shameless and misnamed National “Anti-Corruption” Commission has sought to press charges against Thailand’s last democratically-elected PM, Yingluck Shinawatra, and her cabinet, for financially compensating those ordinary Thai citizens who suffered loss and/or injury during the period of political turmoil from 2005-2010. Whilst there were certainly flaws with this compensation scheme, it did mark the very first time that the Thai state had sought to acknowledge and make reparations for harm done to its civilian population. Given Thailand’s long history of massacre and impunity such a compensation scheme was remarkable & unique.

What is far less unique is the present military junta’s attempt to conjure up a re-telling of the very recent past whilst mouthing the bogus rhetoric of unity and reconciliation – this is an old trick the amaart have used time and time again.

As previously stated, in the next few days my law firm will be releasing a number of documents relating to the events of 2010. There will be little in these documents that those who witnessed the terrible events of 2010 – including myself, who took part in efforts to negotiate a peaceful denouement – will find revelatory. Yet it is important we distribute these documents so that all those seeking justice in Thailand are equipped with the tools to engage in that struggle.

Over the last 5 years many of us who are aware of the truth have exercised unshakeable resolution in our efforts to expose the obvious lies and distortions of the Army, Abhisit’s “Democrat” Party and their assorted PR flunkeys. So prejudiced are the Army & Abhisit’s attempts to engender a cover-up that they’ve even attempted to use a fallacious “reconciliation” process in order to de facto sustain and further impunity.

The only route to reconciliation is via the things that the Thai Army and Democrat Party fear the most – truth and justice. It is to these things we must adhere as we continue in our struggle.

Sign up to receive updates from robertamsterdam.com in your inbox