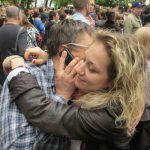 Proving the adaptability of the protest movement, yesterday saw a more genteel incarnation of anti-Putin action take place in Moscow.  It has been noted that since the tumult of May 6, protestors have had to diversify their ways of making their opposition to the President known if they wish to avoid an increasingly defensive police response.  The ‘Test March’ or ‘Sunday stroll’ which took place along Rozhdestvensky Bulvar, was spearheaded by novelist Boris Akunin and attracted the great and good of Moscow’s literati.  Since Russia’s admirable literary canon is replete with dissident figures, there is undeniably a tradition worth drawing upon.  The Moscow Times has some of the details:

Mathematician Fyodor, 63, held up an electronic reader with the words, “If you come up against a lie, use it,” a quote he attributed to Thomas Carlyle, the 19th-century Scottish writer.

Marchers said they were appalled by the violence at the May 6 rally and welcomed the authors’ march. “It was scary. It seemed like a completely different group from the one that had been going to the rallies,” said Ksenia Velembovskaya, 60, editor of an academic journal. “Today, I feel great. These are our people.”