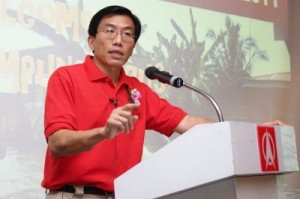 Earlier this week I was shocked and appalled to learn that the prestigious institution Yale University had buckled under pressure from an authoritarian regime to ban any form of protest at its joint venture with the National University of Singapore (NUS).  It’s really quite unbelievable.  According to a report in the Wall Street Journal, Yale-NUS will forbid any public demonstration of any kind, and will forbid its students from forming “partisan political societies.”

One would think that respect for these basic universal human rights to free expression and association would be the hallmark of an esteemed institution of higher learning like Yale, but it appears the university’s leadership are thoroughly unaware of the kind of brutal repression of democracy that they have agreed to sponsor.  How it is possible in this day and age for an American university to become an instrument of repression for a ruthlessly authoritarian state, I cannot understand.

As many of you are aware, I represent a leader of the pro-democracy opposition in Singapore, Dr. Chee Soon Juan.  In fact, when I last attempted to travel there to meet my client, the authorities refused me entry to the country without explanation.  Below is an open letter sent by Dr. Soon Juan to Professor Pericles Lewis, President of the Yale-NUS College.

I read with extreme dismay the Wall Street Journal’s report that the new Yale-NUS College will not allow “partisan politics” or the formation of “political parties on campus”. This includes societies linked to political groups. Beyond that, students will be “totally free to express their views.”

Yale-NUS will adopt this policy because the Ministry of Education in Singapore insists that the College “will have to comply with the university rules as well as Singapore laws.”

The ban is disturbing on two levels. First, would you care to point out what Singaporean law prohibits the conduct of partisan political activities by students or bans the formation of political parties and groups in universities?

If Yale wants to be a truly law-abiding corporate citizen then it should respect the constitution which is the “supreme law of the Republic of Singapore “, not unconstitutional pronouncements made by the ruling party.

Of course, public assembly in Singapore is disallowed. The obvious question that follows is: How can Singaporeans challenge such a law when the law strips away our very right to challenge it?

Add to this the fact that the every newspaper, TV channel and radio station on the island is owned and run by the state, and you have the perfect autocratic system where laws – however undemocratic – are easily passed to control the people, including, now it seems, US universities that operate here.

It seems like this ban by Yale-NUS on political parties is yet another pronouncement made arbitrarily by the ruling party to safeguard its authoritarian control in Singapore. Tragically, Yale seems a rather willing partner in the exercise.

Secondly, if it is all right for Yale students to organise themselves and for political parties, like the Republican Party and the Democratic Party, to engage in partisan politics in the Yale campus, why is it different for Singaporeans? Are Singaporean students – who, by the way, pay good money to participate in the programme offered by Yale – not entitled to similar educational experiences as their counterparts in the US? Are you not short-changing your students in Singapore?

Offering the meaningless concession that students are, other than the prohibitions, “totally free to express their views” fools no one and is, quite frankly, offensive. It’s like trying to bluff a kid by telling him that other than something sweet, he can have any candy he wants. If I must spell it out, “totally” means to the full and complete extent, unencumbered by restrictions.

You had told your colleagues that “Things are changing (in Singapore) rapidly, and a lot of people in the US have a sense of it only from old newspaper reports.” I agree. Unfortunately, it’s for the worse. While it was perfectly legal for less than five persons to conduct a protest in the past, the Singapore Government introduced the Public Order Act in 2009 to outlaw even one person from protesting.

I, as with many Singaporeans, have tremendous admiration for higher-education in the US. I was a student at the University of Georgia in Athens and had the eye-opening experience of joining my fellow Chinese and Taiwanese students in protesting against the Tiananmen Square massacre in 1989 – on campus. I am forever grateful for that opportunity to totally express my views, something I did not have in Singapore.

You can, therefore, well appreciate by my disappointment when I learned that a revered institution like Yale University would acquiesce to an unreasonable, undemocratic, and un-academic policy to ban political parties from engaging students at Yale-NUS. I have been stopped – twice – from meeting students at NUS. It is tragic that I will again be unwelcome at an academic institution in my own country.

My colleagues and I in the Singapore Democratic Party I have welcomed the setting up of Yale-NUS because we had hoped that the College would have the courage of its convictions to reject undemocratic rules regulating campus life. It seems now that instead of Yale opening up the minds of Singaporeans through academic inquiry and scholarship, it is the Singaporean Government that will close the minds of the people running the College.

I would go to the US to discuss this matter with you and your colleagues at Yale if I could. But I have been sued and made a bankrupt by two former prime ministers as well as the current one and, as a consequence, I have been barred from leaving the country. This, however, should not prevent us from meeting in Singapore on your next visit. As such, I take this opportunity to extend to you my invitation.

I am making this an open letter as its content is of public interest. Thank you and I look forward to your reply.