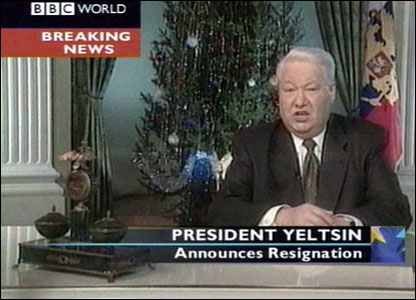 On New Year’s Eve 1999, President Boris Yeltsin shocked the Russian public with a sudden resignation speech, introducing into power for the first time his then-Prime Minister Vladimir Putin, who up until the moment had been virtually unknown.  In light of Putin’s third-and-a-half coronation this past Sunday, Yeltsin’s words strike a chord in some sort of parallel universe.

“I am sorry,” he said, “that many of our dreams failed to come true. That things we thought would be easy turned out to be painfully hard. I am sorry that I did not live up to the hopes of people who believed that we could, with a single effort, a single strong push, jump out of our gray, stagnant, totalitarian past and into a bright, wealthy, civilized future. I used to believe that myself…. I have never said this before, but I want you to know. I felt the pain of each of you in my heart. I spent sleepless nights, painful periods thinking about what I could do to make life just a little bit better …. I am leaving. I have done all I could…. A new generation is coming; they can do more, and better.”

The past, it turns out, it a lot harder to shake off than the present.