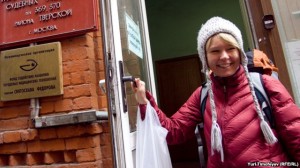 The Goldman Environmental Prize, widely respected as the world’s leading prize for ecological activism, has chosen Yevgenia Chirikova, the 35-year-old co-founder of the Khimki Forest Defenders, as one of the recipients of its $150,000 prize.  From the Prize’s website, a profile of this unquestionably deserving winner:

Despite the government’s continued efforts to suppress the movement, Chirikova has succeeded in garnering widespread support from a diverse range of interest groups. Even the Moscow chapter of the Russian Federation of Motorists, an unlikely ally for an environmental group, has joined their efforts to fight the construction project. Defend Khimki Forest’s first rally amassed a crowd of 5,000 people—one of the largest public environmental protests in Russian history—and gathered more than 50,000 signatures.

The most significant victory came when Chirikova and her colleagues convinced the European Bank of Reconstruction and Development and the European Investment Bank, major financial backers of the highway, to withdraw their funding, citing environmental, social and financial concerns about the project.

Government officials did everything in their power to stop the movement, including wrongfully arresting and detaining protesters and threatening Chirikova and her family. Unnamed assailants, likely associated with Khimki officials, beat activists and journalists questioning the project. Most notably, the journalist Mikhail Beketov suffered permanent brain damage and lost a leg and four fingers in a failed murder attempt in November 2008. Chirikova herself has been arrested and detained numerous times, faced baseless rumors of being an American spy, and fought false claims of neglect and mistreatment from child protection authorities who threatened to take away her children.

In this atmosphere of violent political and civil repression, Chirikova and her colleagues continue to fight for an alternative route and an absolute halt to the forest destruction. Energized by the erosion of support for Putin’s ruling party, Chirikova is breathing new life into Russian civil society’s appetite for political reform, and with it, the fight to protect Khimki Forest.