Beltway Journal: Combating Disinformation and the “Deep States” of Russia and China

Nearly a month after the US midterm election, US Secretary of Defense James Mattis confirmed in an interview that Russian operatives had once again interfered in the American electoral process – a revelation that, while hardly surprising, should be a significant cause for concern.

This discovery is yet another indication of an evolving global landscape, where competitive and combative inter-state operations no longer require boots, bullets or bombs to be successful. In fact, it’s becoming increasingly clear that untraditional methods of hostile engagement – namely cyber-warfare – are considered to be efficient, cost-effective, and risk-averse alternatives to classic tactics.

This was the consensus reached by yesterday’s panelists at the National Press Club, which I had the pleasure of attending.

Among them was Dr. Stephen Blank, an expert on Putin, Russia, and the former Soviet Union who set the tone for the rest of the discussion in his opening remarks.

Speaking soberly, Dr. Blank made very clear his confidence in the warnings of the US intelligence and national security authorities regarding Russia’s “active measures” of “cross domain coercion.”

He and the other panelists made examples of the damages that Russian disinformation campaigns have inflicted upon Western democracies outside of the United States, paying particularly close attention to still developing evidence of interference in the democratic processes of Germany, France, the United Kingdom, Italy, Montenegro, Macedonia and elsewhere.

According to Eli Lake, a columnist at Bloomberg with a background in national security and diplomacy, Russia is a malevolent state whose participation in multilateral organizations like the United Nations or the World Trade Organization is a menace to the liberal world order. Mr. Lake went on to explain that apprehensions of foreign menaces should not pertain to Russia exclusively – offering an examination of China, especially their anti-competitive industrial and economic policies.

With the addition of the China dimension, Managing Director of The Wicks Group Glenn Wicks made sure to impart to the audience and his co-panelists that, despite the group’s consensus regarding the subversive espionage of Russia’s and China’s public and private sector institutions, the tools that the United States has in place to combat them are incredibly complex. 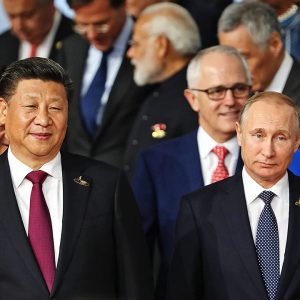 Mr. Wicks echoed Dr. Blank in explaining that the precision of the tools at the disposal of the US Office of Foreign Assets Control (OFAC) is at odds with the tremendous effectiveness of the slanderous and collusive cyber strategies deployed by China and Russia – an assertion that moderator Robert Amsterdam of Amsterdam & Partners LLP and Dr. Dan Gouré of the Lexington Institute corroborate.

Both Mr. Amsterdam and Dr. Gouré emphasized the indomitability of the “deep state” in Russia and China – where corporate and government interests are, more often that not, one and the same. A phenomenon otherwise known as “institutional capture” where industry is just another mechanism through which state institutions may achieve their goals using the same cyberspace disinformation tactics.

And the panelists agreed that it’s these realities that pose the greatest threat to our American democratic process and institutions. By nature of our Constitution, the line separating free speech from weaponized speech is difficult to mark, and foreign interests are aware of this vulnerability. The Russian government showed us as much in the 2016 and 2018 elections, and Chinese SOEs are surely doing the same.

What’s more, Western democracies are not the only entities vulnerable to sabotage from deep state Russia or China – corporations are at risk too. According to Dr. Blake, companies like Silk Way Airlines, SONY Pictures, and Marriott International are only a few of any number of multinationals targeted in information warfare. Whether that entails using disinformation to pollute the public dialogue within a targeted firm’s specific marketplace, or stealing trade secrets to benefit state-owned enterprises, the corporate risks posed by unchecked Russian or Chinese cyber espionage are comparable to the democratic risks.

The panelists concluded that there are very real vulnerabilities in our democratic institutions and private corporations, and foreign agents have proven their capacity to exploit it. This vulnerability puts the United States in a precarious position, how might we combat these foreign “deep states” without adopting their own tactics?

Whatever that answer may be, Dr. Blank accurately depicted this American predicament when, ironically enough, he channeled Trotsky in saying “you may not be interested in war, but war is interested in you.”