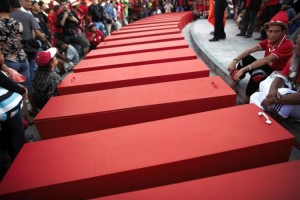 My latest op/ed in Foreign Policy Journal explores some of the similarities between Thailand and Guatemala’s experience with coups, and the subsequent struggle to achieve historical memory.

The topic of historical memory has long been a core theme among many Red Shirt groups, and it’s a issue of vital importance to many countries which have experienced tragedy and civil war. But specifically, the comparative case with Guatemala that has struck my attention for its similarity to Thailand in recent days while reading the excellent book “Paper Cadavers” by the Canadian academic Kirsten Weld.

On the surface, there is very little that connects the tiny Central American republic of 15 million to the Southeast Asian juggernaut of 67 million people, with completely different societies, economies, and political systems. But what Guatemala and Thailand share is fascinating: a common history of repeated, violent military coups and heavy U.S. involvement as a result of the Cold War, creating a lingering distortion in each nation’s political culture.

Many passages from Weld’s book are chillingly applicable to today’s Thailand.

As part of her research examining the secret archives of Guatemala’s military dictatorship, she came across a former guerilla named Gustavo Meoño, who for a time served as the director of the archives.  According to Weld:

“Meoño’s postwar objectives included the recovery of what he called ‘democratic memory’ – a focus on the history of political struggle, rescuing and restoring the stories of those who had resisted dictatorship, even if their alternative visions had failed or been flawed in their execution. Without protecting this ‘democratic memory,’ Meoño believed, Guatemala would never construct a democratic national identity; instead it would continue to criminalize those who fought for the right to think differently, discouraging future youth from politics and leadership.  ‘The idea of the rights to memory, truth, and justice is not an issue of the left or of the right,’ he argued. ‘It’s an issue of fundamental human rights, independent of ideology or political militancy.’”