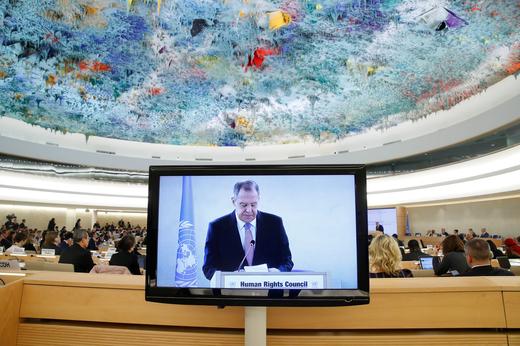 Foreign Minister Sergei Lavrov appeared at the UN’s Human Rights Council yesterday pledging Moscow’s support for the Syrian army until it has defeated its “terrorist threat”, and alleging that Syrian rebels are blocking the civilian evacuations from Ghouta. President Vladimir Putin however said that Russia has successfully managed to evacuate “quite a big group” of civilians from the region. Ukraine’s Naftogaz has declared its victory against Gazprom following a Stockholm arbitration court’s order that the latter pay it $2.56 billion for falling to pump the agreed volumes of gas through its pipeline system, although Gazprom says it disagrees with the ruling and will defend its rights. ExxonMobil has announced that, as a result of US and European sanctions against Russia, it will exit its joint ventures with Rosneft. Russian Railways would like the Kremlin to abolish its official list of professions deemed off limits for women workers.

Austria’s new Chancellor is backing the Nord Stream 2 pipeline, a project that is controversial  because it is expected to make Russia Europe irrevocably dependent on Russian gas by creating a direct gas route to Germany. As part of Austria’s new support for Russia, both have asserted that there is no alternative to the Minsk peace agreement. Sberbank, a “key beneficiary” of the Central Bank’s purging of its less well-performing banks, has been seeing continuous growth in profits for the past three years, with its market value now exceeding that of Gazprom. It reported a 22% year-on-year increase for the final quarter of 2017, also cashing in on reduced competition and an improving economy. The stock market is expected to post moderate gains for the rest of the year.

Following clean results for the rest of the Pyeongchang team’s doping tests, Russia was reinstated by the International Olympic Committee. The first televised presidential debate saw participants trading insults and pouring water on each other; Vladimir Putin did not take part. TV journalist Yekaterina Kotrikadze made an on-air accusation of sexual harassment against State Duma chairman Leonid Slutsky.