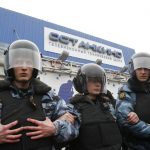 ‘Anatomy of a Protest’, last week’s NTV documentary about opposition rallies, caused a storm after many accused the channel of spreading false information, including the notion that protesters are paid to take part in opposition rallies.  The documentary sparked a spontaneous and immediate protest in Moscow, with up to 100 people being detained outside the Ostankino television tower at the 500-1,000-strong unsanctioned gathering.  Many came out to prove their mettle: ‘They say we came for money. It’s not true […] I came out for free earlier, and I’m here for free today,’ said one.  The outrage could lead to a collective lawsuit against the channel; media holding Expert says it will break ties with NTV due to the documentary’s ‘cheap propagandist work’.  RFE/RL has footage of the protest and detentions.  Boris Nemtsov was among those arrested: ‘Putin’s most important weapons are lies and propaganda and they are just as effective at protecting him as police batons,’ he said.  Nemtsov and Sergei Udaltsov are helping to organise a ‘March of the Millions’ on May 6 to protest the inauguration of Vladimir Putin.  A second detainee death was reported last week, as a 100-strong unsanctioned rally held in Kazan yesterday to protest the death of Sergei Nazarov in custody led to ten detentions.

Less than half of Russians believe that the presidential election results are genuine, says a VTsIOM poll.  ‘As Russians tire of Putin, it remains to be seen if the rest of the world will continue to pretend he is the elected ruler of the country,’ says Garry Kasparov.  Ten people in Astrakhan are on a hunger strike in protest against alleged falsifications on March 4 when its new mayor was elected, sparking calls from Sergei Mironov for President Dmitry Medvedev to investigate the claims.  PACE head Tiny Kox writes on his experiences as an election observer, noting positive and negative examples of polling stations.  Medvedev ordered prosecutors to examine the case of Suren Gazaryan, the environmentalist arrested in Krasnodar, as his rights council urge him to pardon Mikhail Khodorkovsky before he leaves office.  Parnas (the Party of People’s Freedom) says it will not continue participating in Medvedev’s working group on legislation reform, calling it ‘nothing more than a profanation’.  New relaxed rules for opposition party registration ‘could pose a test’ for the party, as it is anticipated that the overall number of political parties in Russia will mushroom as a result.

Alexander Kargaltsev explains how he left Russia two years ago after a police attack at a gay pride rally, and notes that Russia’s tolerance of homosexuality is ‘getting worse’.  The Russian editor of Esquire has been fined $1,360 for the illegal promotion of drugs after the magazine quoted ‘a user from an encrypted conspiratorial website’.  The Obama administration will boost funding for civil society and democracy in Russia, where many human rights organisations rely on foreign money.  A Moscow-based charity is investing $1 million in a project that will take Russian cultural programming to New York audiences.  ‘It-girl’ Ksenia Sobchak speaks to the New York Times on ‘restyl[ing] herself as a leader of the opposition’.

Deputy Prime Minister Igor Sechin is not likely to appear in Vladimir Putin’s new cabinet, according to Vedomosti, because he and Medvedev ‘cannot stand each other’.  The BBC reports on the ‘grannies’ performing for Russia at the Eurovision song contest.