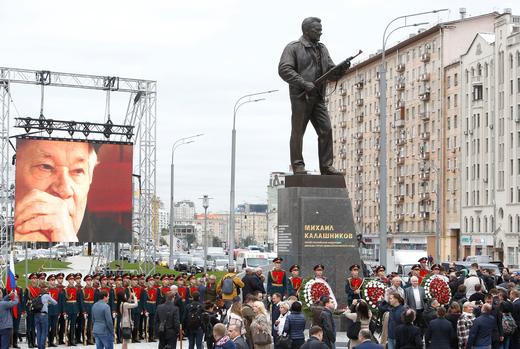 As onlookers of the Zapad military exercises watched Russian hardware defeat an imaginary Western coalition, two people were seriously injured after an army helicopter accidentally fired a rocket at a row of parked cars and spectators when “the missiles blasted off on their own” due to a glitch. The Defence Ministry responded to the reports of bystanders’ injuries by saying that they were “either a deliberate provocation or someone’s individual stupidity”. Here is a pro-Russia take on the exercises. A single protester was detained just after telling journalists that he was “against any propaganda of Russia’s military might”, as crowds gathered at a rally against the new Moscow statue of Mikhail Kalashnikov, the inventor of the AK-47 assault rifle. The Moscow Times asked bystanders what they thought of the statue, with largely positive answers, such as, “I would want my children to know what he’s done for the motherland.”

In its first Kremlin-related leak, Wikileaks has released a new set of documents which, it claims, show the surveillance apparatus that the Kremlin uses to spy on Internet and mobile phone users. An open letter is calling for Vladimir Putin to stop discouraging the mandatory study of indigenous languages in regions with large ethnic minority populations; the cutting of language classes has already caused protests and discords in some regions. In a vintage Soviet move, policewoman Oksana Semykina was put into a psychiatric hospital after complaining about how much overtime she was expected to work. A senior member of the Culture Ministry wants a pre-screening of The Death of Stalin, a satirical movie about the Soviet dictator, ostensibly in a bid to prevent violent protests from communists. Foreign Minister Sergei Lavrov is pressuring the UK not to change its policy towards Russia.

Rural is waiting to see the outcome of Brexit talks and evaluate other risks before deciding whether or not to list publicly in London. A wave of bomb scares across Russia this week may have been tracked to a hacker group in Brussels, according to an Interior Ministry source. US President Donald Trump’s nominee to be ambassador to Russia says there is “no question, underline no question” that Moscow interfered in the 2016 US presidential election.

PHOTO: People gather for the opening ceremony of a monument to Mikhail Kalashnikov, the Russian designer of the AK-47 assault rifle, in Moscow, September 19, 2017. (SERGEI KARPUKHIN/Reuters)