Surkov: The Legacy of a Maverick 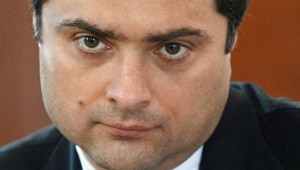 In case you missed it, David Remnick’s extensive piece on Vladimir Putin, democracy and activism in Russia, published in last week’s New Yorker, is well worth a read.  Under a broader consideration of the near impossibility of successful anti-government activity in the country, the article mentions a number of rights activists who have suffered persecution for their work over the last decade, including Oleg Orlov of Human Rights Watch, Yevgenia Chirikova, Mikhail Beketov, Ivan Alexeyev (or Noize MC), and looks at the long-term difficulties faced by the organisation Memorial in its efforts to advocate human rights.  The piece also touches on the role in the Kremlin of Vladislav Surkov, who was ousted today from his long-term role of political spin doctor, and shunted into a deputy prime minister role within which his influence will be greatly reduced.  It seems that the man behind the ‘sovereign democracy‘ that has shaped much of the Kremlin’s current configuration fancies himself a bit of a bohemian.

The architect of some of the most important features of Putinism—the complicated media structure; the United Russia Party and the pocket opposition; the loyalist youth groups—is a former bohemian, banker, and businessman named Vladislav Surkov. The Soviet system was a pre-technological attempt to crush any trace of civil society. Surkov, in numerous speeches, has promoted what he calls “sovereign” or “managed” democracy, a postmodern system that includes elements of autocracy, democracy, and sheer brutalism. Surkov has no interest in Homo sovieticus. He wants to be at once shadowy and cool. In his office, he displays pictures of Tupac Shakur, Joseph Brodsky, and Che Guevara. Before coming to the Kremlin, he worked in private industry—including as an executive under Mikhail Khodorkovsky. He used to write songs for the gothic rock group Agata Kristi. And he is believed to have written, under a pseudonym, a novel called “Almost Zero,” about a former bohemian of the nineteen-eighties who becomes a corrupt public-relations man. (The author is one Natan Dubovitsky; Surkov’s wife is named Natalya Dubovitskaya.)

If Putinism has an ideological manifesto, it is a 2007 lecture that Surkov delivered, at the Russian Academy of Sciences, entitled “Russian Political Culture: The View from Utopia.” The theme, which is pronounced in Putin’s rhetoric, is that there is no such thing as universal democracy. Surkov says that the unique immensity of Russia demands uniquely centralized power. He believes that all democracies around the world are in fact managed and hypocritical, and give only the illusion of real freedom. Like Putin, he insists that the West cease its lectures on freedom and human rights. “They tell us about democracy,” he said at a press conference in Moscow, “while thinking about our hydrocarbons.” At the same time, Surkov is quick to remind liberals that it is only the regime that stands between them and the growing numbers of hard-line Russian nationalists.

Remnick also touches on the spikier aspects of U.S. criticism of Russian politics:

What both Putin and Surkov find insufferable is any hint of what they see as criticism or interference from the United States or Europe. A few days before the Duma elections, the government started cracking down on the most effective election-monitoring N.G.O. in the country, Golos (“voice”). At the mention of this, Peskov lost his good cheer. “We have special services, and we have all the data about N.G.O.s being sponsored by foreign states.”

Yulia Latynina has an interested angle on this in today’s Moscow Times: the Kremlin may loathe U.S. interference, but thanks to what she views as an extensive kleptocracy, what the U.S. says matters much more than Vladimir Putin would like to admit.  Latynina’s analysis chimed oddly with Putin’s announcement yesterday that $80 billion has left Russia in capital outflows this year.