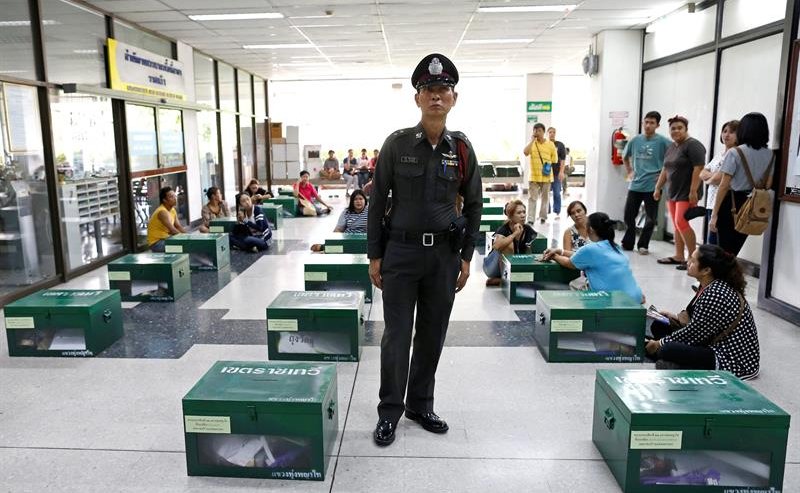 On Sunday 7th August 2016 ordinary Thais were forced, at gun point, to take part in the junta’s sordid “Constitution Referendum”.

These hardworking and decent Thai people did so knowing that if they campaigned against the referendum they could be arrested, tried in a military court and thrown into one of Thailand’s horrific prisons for a decade. These same Thai people also knew the junta’s spectacular capacity for violence – the pile of 100 bullet-ridden corpses from the 2010 Bangkok Massacre testament to the last time they dared confront the Thai military – and that their unelected dictator, General Prayuth Chan-ocha, had a ready willingness to brutally suppress them again should the opportunity arise. Finally, Thai citizens knew that if they rejected the constitution worse could await them – Prayuth himself had repeatedly threatened to impose an even more anti-democratic constitution on Thais should they dare to refuse to back his squalid charter.

So the ordinary people of Thailand took the only choice they could – they voted for the constitution. On a very low turnout of roughly 55% (the last full & free general election in 2011 had a turnout of 75%) just over 61% voted in favour. This “yes” vote represents 33.5% of the Thai electorate – hardly the kind of ringing endorsement such a constitutional change needs. However, we must state here we fully respect the will of the Thai people and fully understand that given the choices available to them they took the best option they could. But we make this statement this with a very heavy heart and huge misgivings as Sunday’s referendum dealt another hammer blow to the democratic aspirations of ordinary Thais.

The constitution itself – we discussed it previously here – is essentially a document designed to cut away the legitimacy of the elected house of representatives. This new constitution removes the power to amend the constitution from representatives legitimately elected by the Thai people and hands it over to the unelected senate which will include members of the military. Put simply, executive power no longer rests will a body democratically mandated by the Thai people. Democracy is abrogated.

Yet, such is the yearning for Thais to have Prayuth removed from office, for the whip hand of the military courts to cease their repression and for the power-crazed Thai Army thugs to return to their barracks, that they voted for this aberration of a constitution. At least Thais can now look forward to some kind of promised “elections” in 2017 and a return to a modicum of civilian rule.

Of course a few Thais did attempt to push-back against both the referendum and the constitution. Unsurprisingly these brave people were immediately repressed by the draconian military government – some sources are citing that almost 200 people have been arrested for simply campaigning for a “no vote” by the Thai Army in the run up to the referendum. The fate of these 200, at the time of writing, is unknown but many could face lengthy prison terms.

The international reaction to the “DemExit Referendum” has been noticeable by its almost complete and shameful absence. A few human rights groups have made a handful of cursory statements and Bangkok’s notoriously insipid Western media correspondents have mouthed a few platitudes but the governments of Europe and North America have been almost completely silent.

The net result is that the Thai people’s exit from democracy has been little more than a fait accompli enforced by a military government and ignored by the world.

We continue to offer support to those seeking a genuine Thai democracy and call on the international community to condemn, without any reservation, the terrible hand forced upon the Thais and the ongoing destruction of their democracy.