Venezuela and the Limits of Sanctions 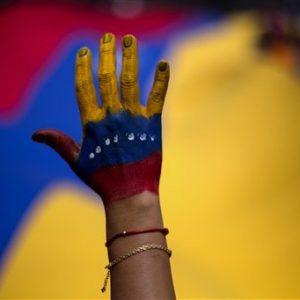 As the a new sanctions bill against specifically targeted Venezuelan government officials has now cleared both houses of the legislature (a rare event indeed) and is headed to President Barack Obama’s desk for signing, a wide range of reactions have come forward, from conspiracy mongering to the familiar cries of imperial oppression.

While sanctions are by no means a perfect tool, the main critics of the “Venezuela Defense of Human Rights and Civil Society Act of 2014” appear determined to misrepresent the nature of their reach and function.

President Nicolás Maduro is, unsurprisingly, a leading merchant of the disinformation. Speaking at a Monday rally against the sanctions organized by the government, Maduro gently suggested that the “insolent yankees” can “shove their U.S. visas where they should be shoved.” He then proceeded to call the former Prime Minister of Spain a “murderer,” but that’s another story.

Rebounding off Maduro’s faded impersonations of his more eloquent predecessor Hugo Chávez, even foreign propaganda outfits like Russia’s RT and Iran’s Press TV have been enjoying themselves with this coverage, especially with an opportunity to contrast the news with running commentary on Ferguson, NYPD violence, and the release of the CIA torture report.

While the arguments from the propagandists won’t do much to win over neutral minds, there has been a notable push back against the sanctions filtering up through academic, policy, and NGO communities based on a number of flawed assumptions, including some opposition aligned organizations. The most cited statement I’ve seen in response to the sanctions bill comes from the Venezuelan Program for Action and Education in Human Rights (PROVEA), which has a long history of fearless criticism of the Chávez-Maduro regime, arguing that the sanctions will backfire.

“Instead of weakening an authoritarian government, it will reinforce it because it lets them argue that there is a conspiracy promoted by the United States behind the protests,” said Provea General Coordinator Marino Alvarado (our translation). “At Provea we have no doubt that it is necessary to investigate and sanction those public servants involved in grave violations of human rights and acts of corruption that damage the national interest. However, we believe that a measure of this nature would contribute to reinforce the authoritarian government of Nicolás Maduro and allow him to distract public opinion from a packet of neoliberal economic measures that would affect the poorest sectors of the population.”

Firstly, I don’t buy the idea that sanctions allow Maduro to build up his regional support. Take a look at what Uruguayan President José Mujica had to say about the disgraceful human rights and political prisoner situation in Venezuela during his recent visit. In addition, President Barack Obama has partially lifted the Cuba embargo, which will allow, among other measures, the use of US credit and debit cards on the island. The U.S. is now sending three Cuban spies back home who had been arrested, while Cuba is releasing from prison American contractor Alan Gross today.  Venezuela may still have the support of El Salvador, but judging by their side deals with China, Maduro is beginning to feel alone.

Secondly, the assumption that sanctions would only make Maduro more popular and entrenched in power is dependent on his ability to portray the sanctions as something that they are not – to make the population at large feel responsible for defending the private and illicit wealth of the country’s most corrupt individuals holdings millions of dollars in U.S. banks. This is not a given.

There doesn’t seem to be very much attention paid to the actual language of the bill, S.2142, is specifically limited to individuals filling certain criteria, and not directed at the nation as a whole (which in my view has been a major problem with the Washington’s policy toward other states like Cuba and Iran). Sanctions are very limited tools – they are unlikely to change any specific outcome overnight, but what they do is draw a clearer line about what kinds of people we can do business with, and which ones are welcome to keep their money in Bolivars. Below are the criteria:

The President shall impose the sanctions described in subsection (b) with respect to any foreign person, including any current or former official of the Government of Venezuela or any person acting on behalf of that Government, that the President determines—

(1) has perpetrated, or is responsible for ordering or otherwise directing, significant acts of violence or serious human rights abuses in Venezuela against persons associated with the antigovernment protests in Venezuela that began on February 4, 2014;

(2) has ordered or otherwise directed the arrest or prosecution of a person in Venezuela primarily because of the person’s legitimate exercise of freedom of expression or assembly; or

(3) has knowingly materially assisted, sponsored, or provided significant financial, material, or technological support for, or goods or services in support of, the commission of acts described in paragraph (1) or (2).

There isn’t yet an official list of the “Bolibourgeoisie” who will be affected by the sanctions bill, but back in May, Sen. Marco Rubio released a list of some 23 officials, which mainly focused on corrupt members of the judiciary (Prosecutor Luisa Ortega Diaz, for example, who has overseen repeated political prisoner cases). Eventually there could be conditions in which sanctions could toward individuals like Luis Alfonso de Borbon or maybe the guys surrounding Derwick Associates, whom in the past have been alleged to have benefited from unlawful activity.

These sanctions do not represent Washington reaching in to Venezuela in any sort of capacity (which is not at all on the administration’s agenda), but rather they impact what these specific individuals can do within the U.S. banking system. So why should the general public be so concerned about protecting just a handful of individuals who have been accused of human rights crimes and/or corruption? In many ways, the current situation is similar to the enactment of the Sergei Magnitsky Act, which targeted a very short list of Russian officials who made loads of money off a corrupt tax rebate, and then conspired to murder the lawyer who blew the whistle on them.  When the sanctions came into effect, one of the ways that the Russian propaganda machine sought to achieve national solidarity behind the murderers was to ban adoptions of Russian orphans by Americans – make the kids pay!

Secondly, critics of the sanctions bill – even very well meaning opponents from the opposition side – are too quick to play to the government’s false narrative, instead of making them play to the facts and not dodge the real questions of this debate.

The sanctions debate is about the events of February 12, 2014, when Maduro’s regime brutally and mercilessly cracked down against peaceful protesters, firing live rounds into crowds of unarmed people, killing dozens and injuring hundreds. It is exactly this kind of willfully reckless and irresponsible behaviour by a brutal government that seriously deserves strong action from the always-hesitant international community.  The protests, which were provoked by Venezuela’s historically unprecedented murder rate and rampant insecurity capped off by the murder of a famous beauty queen, were branded by Maduro as some sort foreign “imperialist” conspiracy.

But why should anyone believe him at this point? Maduro’s attempts to paint every failure of his government on imagined foreign conspiracies are less and less credible every day. With oil prices crashing, inflation reaching the highest levels on the continent, and shortages of basic products and services, from toilet paper to electricity and water, Maduro is under extraordinary pressure to explain what might be one of the worst failures of governance in the world in recent memory.  The economist Ricardo Hausmann recently took a strong dig at Maduro’s habit of blaming anyone and everyone for his poor economic policies: “If Maduro wants someone to blame, he should look in a mirror. Maduro and his eternal little bird frittered away the largest oil boom in the nation’s history, and now they don’t have any money to pay for their obligations. (…) Maduro is incapable of steering Venezuela away from the crisis he got the country into. He is incapable of understanding its causes, design its solutions, build alliances, and picture a viable and promising future, and invite Venezuelans and foreigners to build the country together.”

Is the Venezuela sanctions bill steeped in domestic U.S. politics? Of course it is – that’s the only way Washington does legislation. Should we be cynical of a government that says its promoting human rights at the same time it violates them? Of course. But none of that erases the crimes of Maduro’s regime, nor does it negate the beneficial impact of targeted sanctions against very specific individuals close to the regime to create a separation between Venezuelan citizens the poor quality of leaders that have stolen control of the country.

This is a time for more action on Venezuela, not less. We’ve already been trying the “hands off” approach for more then 10 years, and the absence of results speaks for itself.