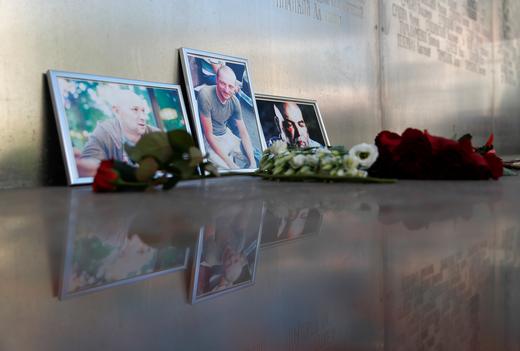 A new survey from the Levada Centre shows that more Russians are willing to partake in public protests over economic and political conditions than they have been since before Putin came to power (28% now, compared to 8% in March of this year), thanks to widespread discontent over plans to raise the retirement age (71% want the bill scrapped). The Levada Centre marked the number as the highest of the “post-Crimea period”. Members of Pussy Riot who were re-arrested after serving a 15-day sentence for their World Cup protest have been released after one extra day in detention; they could face further charges. Ukrainian President Petro Poroshenko has ordered the creation of a body that will seek legal damages from Russia in connection with its annexation of Crimea.

Orhan Dzhemal, Alexander Rastorguyev and Kirill Radchenko, the journalists who were killed in the Central African Republic this week, were funded by former Yukos head Mikhail Khodorkovsky. They were investigating Wagner, a private military firm that is said to have carried out combat missions on the Kremlin’s behalf. Khodorkovsky says he will try to find those responsible for the murders. Sergei Grachyov, a journalist for Moscow newspaper Argumenty i Fakty, has been found dead after disappearing during a work trip to Nizhny Novgorod. Joel Nocera seeks to explain why Kremlin heads can’t get William Browder off their minds. “The Magnitsky Act has messed with the heads of Putin and the Russian elite like nothing else.”

Sanctions are not affecting Russia and the US’ trade in space rocket engines. If the US goes ahead with its proposed sanctions, the ruble could plunge by as much as 15%. A zombie walk scheduled to be held in Perm is being opposed by Orthodox Christians who say it will psychologically affect children.

PHOTO: Photographs of journalists, (R-L) Orhan Dzhemal, Kirill Radchenko and Alexander Rastorguyev, who were recently killed in Central African Republic by unidentified assailants, are on display outside the Central House of Journalists in Moscow, Russia August 1, 2018. REUTERS/Maxim Shemetov