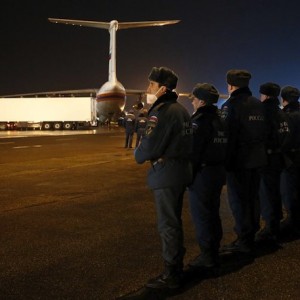 Transport Minister Maksim Sokolov has dismissed claims by an Islamic State affiliate in Egypt’s Sinai Peninsula that it was responsible for the downing of a Russian Airbus that crashed in the region on Saturday, killing all 224 people on board.  The aircraft apparently broke up in mid-air, leaving observers puzzled as to the cause of the disaster.  The Investigative Committee has launched a criminal case against the Russian airline Kogalymavia, which had chartered the plane.  Washington is reportedly considering positioning more ships and naval assets in Europe as it faces a level of activity from Russian warships and submarines unseen in the last twenty years.  Three years after being dismissed from his post as Defense Minister as a result of a major corruption scandal, Anatoly Serdyukov has now been appointed industrial director of the multi-billion Rostec state corporation.

Now that Russia has turned its attention to Syria, there is evidence, the Guardian reports, that pro-Russia fighters in Ukraine’s rebel-held territories are losing faith in Moscow’s support.  Brian Whitmore briefs us on how Moscow has opted, at least for the moment, for an economic, as opposed to military war against Ukraine.  Finance Minister Anton Siluanov has voiced concerns about the IMF’s plans to change its policies in order to continue lending to Ukraine, even if Kiev defaults on its debt to Russia.  This Moscow Times op-ed notes how little support Moscow’s campaign in Syria has received from its CIS ‘allies’ – the result of its aggression in Ukraine?

Bloomberg examines the expansion plans of Yota, the company which has, according to the Kremlin, created a smartphone to rival Apple’s efforts.  It has it sights set on China.  A new poll has found that Russians believe they need an income of at least $2,725 a month to ‘feel happy’.