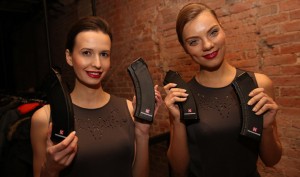 In an admission which has sent the ruble spiralling further downwards, Russia’s Finance Ministry has acknowledged that Western sanctions and low oil prices will push the country into recession next year.  GDP is predicted to contract by 0.8%, as opposed to growing 1.2% as initially forecast.  The Central Bank admitted that it spent $700 million to support the ruble two days ago as the currency tumbled the most in sixteen years.  The Finance Ministry might spend as much as $9.3 billion from the budget’s Reserve Fund next year if pessimistic predictions become reality.  Despite the growing sense of panic, an analyst quoted in Bloomberg believes that sanctions will not break Russia’s resolve, of which World War Two’s Siege of Leningrad is testament.  A deputy from United Russia sees an anti-Russian plot in the Central Bank behind the ruble’s losses; accusations which the Prosecutor General’s Office are examining.  Iconic weapons manufacturer Kalashnikov, which has lost its American market due to sanctions, has unveiled its re-branding which involves a ‘peaceful’ message.

In this year’s 2014 Corruption Perceptions Index drawn up by Transparency International, Russia has dropped nine places to 136th from 127th in 2013.  Psychological tests to judge the potential corruptibility of Russian state officials could become standard practise.  As Russia-NATO relations plunge into deep freeze, Germany has urged the organisation to establish an early warning system with Russia to prevent any military accident from escalating.  Gazprom’s gas exports to the European Union and Turkey have reportedly declined by as much as a quarter in November.  Gazprombank will receive almost $770 million from one of the country’s oil-revenue-funded sovereign wealth funds to assist it in the face of Western sanctions.  A number of Eastern European nations are disappointed with the Kremlin’s decision to scrap the South Stream pipeline, which could, some say, prove disastrous for them.

Reports have emerged that the Kremlin hopes to achieve control over Internet content by having Russian providers filter content before delivering it to users.  Apparently a number of blogs written by Western analysts who examine jihadi and extremist groups, among them the Islamic State, appear to have been blocked in Russia.  The Washington Post analyses the Kremlin’s fight to get Russia’s pop stars back on side.  Thwarting street protests should apparently be a major priority for regional officials.