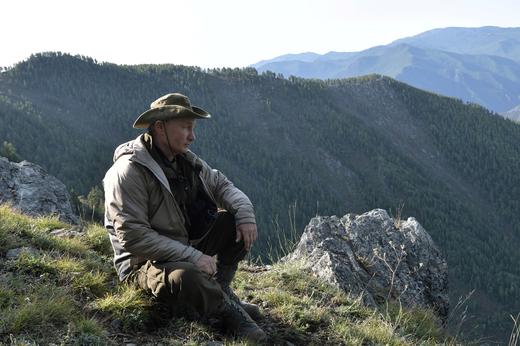 State television channel Rossiya 1 is offering a new weekly programme which follows (and praises, in “breathless commentary”) President Vladimir Putin’s weekly activities. “Putin doesn’t only love children, he loves people in general,” his spokesman, Dmitry Peskov, told host Vladimir Solovyev in the first episode, which also praised the President’s willingness to “take responsibility” for the planned pension reforms that are pummelling his approval ratings. RFE/RL offers an amusing summary of the programme (“upping the obsequiousness”) and collects some of its online criticism. More than half of Russians are willing to protest in the streets against the pension reforms – 53% of respondents said they would protest, up significantly from 37% last month. Putin’s plans to revive the economy includes the expectation that oligarchs will spend $120 billion on new investments by the end of his current term, which would take overall investment to its highest level since the Soviet era, potentially taking money away from shareholders and jeopardising profitability. The government’s search for extra cash will also tap the oil industry, currently flush with cash, but the Finance Ministry’s head of tax says it will be able to withstand the planned $15 billion tax increase over the next six years. A nationwide investigation into correctional facilities by the prison service has uncovered dozens of abuse cases.

An independent investigation commissioned by Danske Bank into its own money-laundering scandal found that $30 billion of Russian and ex-Soviet money passed through its small Estonian branch in 2013 alone. State bank VTB, Russia’s second-largest, has sold its New York-based business and ended its direct US presence, which it says is a response to “the current geopolitical situation”. VTB apologised after its CEO described UK foreign minister Boris Johnson as a “jerk”. Sergei Lavrov does not believe that the current crisis in diplomatic relations between Russia and the UK is irreparable, because they naturally have many common interests. “All those events that caused a drastic cooling, if not a freeze of all relations, belong with the ‘highly likely’ class,” he said. Ukraine’s plan to separate its Orthodox Church from Russia’s will be “a tectonic shift” that will likely cause many of Moscow’s Patriarchate priests to defect, and fuel existing tensions between Russia and Ukraine. An activist from Crimea, who works at the a centre promoting Ukrainian culture and language in the region, has fled following a search of her home by FSB agents and an interrogation by the Investigative Committee.

The US President warned Syria and Russia, in a Tweet, against making a “reckless attack” on the province of Idlib. Foreign Minister Sergei Lavrov says the situation in Idlib cannot be tolerated indefinitely, and that Syria and its allies therefore have the right to attack the province. The Kremlin responded to yesterday’s news of the US trying to flip oligarchs into informants, saying that the move constituted US meddling in Russian internal affairs.

PHOTO: Russia’s President Vladimir Putin is seen during his vacation in Sayano-Shushensky nature reserve in the Republic of Tyva, Russia, August 28, 2018. (SPUTNIK)