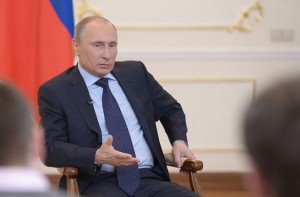 President Vladimir Putin has spoken publicly about events in Ukraine for the first time since ousted President Viktor Yanukovych fled Kiev, at a press conference in which he has described the events in the capital city as a coup d’etat.  Putin described the Kremlin’s concerns that ‘nationalists and radical extremists are rampant on the streets of Kiev‘.  The Russian President calmed fears about the situation escalating by stating that force would only be used as a last resort and that he would not consider the possibility of annexing Crimea.  Whilst asserting that it was ‘unnecessary’ to send troops to Ukraine, he reserved the right to deploy forces in ‘extreme circumstances‘.  16,000 soldiers are currently estimated to be in the region. In the meantime Russia’s military has test fired an intercontinental ballistic missile.  The FT describes Putin’s press conference as ‘a classic performance: clever, tough, sardonic and deeply cynical’.  Robert Coalson ponders the motives for Putin’s Crimea moves: the impulse of a hothead or long-mulled strategic decision?

Professor Andrei Zubov, who had expressed surprise that he was allowed to publish an article comparing Putin to Hitler, has reportedly now been fired from the Moscow State Institute of International Relations.  A news anchor from RT who criticised Russia’s deployment of troops to Crimea has been despatched by the broadcaster to the region to ‘better her knowledge‘ of the situation.  International media rights watchers say independent journalists are being harassed while trying to report on events in Crimea.  Beleaguered independent television channel Dozhd is set to shut down within a month.  Russian prison officials say they have fitted opposition leader Alexei Navalny with an electronic bracelet to monitor his activities during his house arrest.

U.S. President Barack Obama has urged the Putin regime to return troops to their bases.  Moscow is not afraid of Washington imposing economic sanctions, says Kremlin aide Sergei Glazyev.  Reuters explains why Japan is worried about getting caught between Russia and its Western allies.  Russia’s financial assets rebounded after Putin quelled fears of escalating violence.  Ukraine awaits a ‘clear response‘ from Russia on the $2 billion loan which it requires to pay for Russian gas supplies.