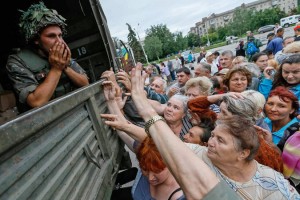 Slovyansk, the town in eastern Ukraine which served as the rebels’ military headquarters has been recaptured by Ukrainian forces, a victory of ‘huge symbolic importance‘ in the words of Ukrainian president Petro Poroshenko.  Why has the Kremlin not responded?  Mary Dejevsky suggests that Russia’s motives may be less aggressive than they might have initially seemed.  The Guardian reports on daily life in Donetsk, ‘a ghost town after dark‘.  The Kremlin has banned a leading member of Crimea’s Tatar community, Refat Chubarov, from entering the peninsula for five years on the basis that he has been guilty of ‘activities to incite interethnic hatred’. ‘Russia doesn’t behave as a partner‘ is the overall verdict of NATO chief Anders Fogh Rasmussen. As sanctions take their toll on ordinary Russians, this article questions whether citizens feel that the annexation of Crimea was worth it.  Energy giant Rosneft maintains it has seen ‘no impact whatsoever‘ from western sanctions.

Despite ongoing disagreements over Syria and Ukraine, President Putin congratulated his U.S. counterpart Barack Obama on Independence Day and called for better relations with Washington.  The British press are fascinated by the revelations about Soviet-era spying uncovered by the archive of KGB defector Vasili Mitrokhin.

The State Duma has passed a new law, in a harsher form than its earlier drafts, that imposes prison sentences of up to five years for repeated violations at public rallies.  Spurred on by the efforts of law-making Internet foes like Deputy Yelena Mizulina, the Duma has passed a law requiring Internet sites to store data of Russian citizens inside the country, a move detractors say is an attempt to control social networks.  Irina Levova, director of strategic projects at the Institute for Internet Research in Moscow sees the vagueness of the Kremlin’s definition of extremism as a trap for Internet users.

‘Free speech is now written in the stars,‘ says Travis Metcalfe, whose Blue Dot project gave a group of Ukrainian astronomers the opportunity to name a star ‘Putin is a dickhead‘.