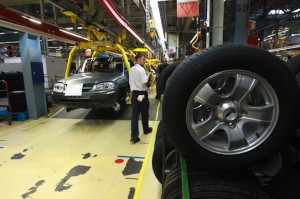 President Putin has held talks with senior security chiefs over a ‘deterioration of the situation‘ in eastern Ukraine as concerns mount that the ceasefire has been breached.  The President apparently has no imminent plans to meet Ukrainian President Petro Poroshenko or the newly elected heads of the people’s republics of Donetsk and Luhansk.  The President has suggested that the drop in global oil prices affecting the Russian economy is the result of a ‘political component‘.  The Federal Anti-Monopoly Service has initiated an inquiry into privately-owned oil firms Bashneft and Lukoil (and the state’s own Rosneft) suspected of market rigging to drive up domestic petrol prices.  Foreign Minister Sergei Lavrov has met with leading German executives in an attempt to improve economic ties between the two countries which have suffered due to Ukraine.  The Russian-made Lada car has proved one of the few benefactors of Western sanctions.  Russia’s first McDonald’s, which closed this past summer in a tit-for-tat over sanctions, is likely to reopen at the end of the month.

The Kremlin has responded with ire to Washington’s decision to investigate Putin ally Gennady Timchenko for money-laundering. Russian lawmakers are revelling in Obama’s losses in the midterm elections, seemingly oblivious, this article points out, to the fact that Republicans advocate even harsher policies against Russia.  President Putin has warned Russian historians to avoid rewriting history for geopolitical interests.  Meanwhile he has softened his position on the Molotov-Ribbentrop pact, a fact which has irked Western observers.

A host on Russian radio station Ekho Moskvy has reportedly been fired for tweeting about the death of one of the sons of Sergei Ivanov, Putin’s chief of staff.  Famed US film director Oliver Stone has told Ria-Novosti that he would like to make a documentary about Vladimir Putin.  The director of Oscar-nominated Russian drama Leviathan, Andrei Zvyagintsev, talks to the Guardian about living in modern Russia.