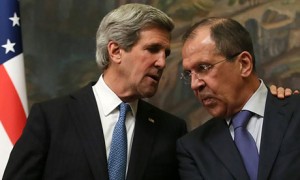 Following talks during which U.S. Secretary of State John Kerry asserted ‘significant common interests’ between Russia and the United States, the two sides have agreed to call an international conference aimed at ending the civil war in Syria. Foreign Minister Sergei Lavrov expressed contentment at the ‘wholehearted effort on the American side to develop our relations in economics, political dialogue and international cooperation’.  Meanwhile ‘productive’ security talks were held between FBI Director Robert Mueller and Russian counterparts in Moscow.  ‘Experts say the atmosphere is a bit more favorable for US-Russia detente today than a few months ago’.  Kerry also met with leading Russian human rights activists, among them Helsinki Group chief Lyudmila Alekseyeva, to discuss the crackdown on rights movements. It has been reported that three more NGOs have been branded foreign agents: the Moscow School of Political Studies, the Urals human rights group and the Public Verdict human rights foundation.

At a meeting with the cabinet President Putin has lambasted ministers for their failure to carry out landmark reforms such as development in the Far East and assisting regional leaders.  Prime Minister Medvedev’s anti-graft drive has certainly fallen by the way side.  ‘Corruption, which Putin now officially battles, announcing the arrest of a corrupt official at least every week, is deeply corrosive – and few seem to believe the anti-corruption campaign to be genuine’.  Business ombudsman Boris Titov will submit a request to free more than 100,000 entrepreneurs serving prison sentences for white-collar crimes to the State Duma next week.  Meanwhile galloping inflation has the attention of the Finance Ministry.  Tycoon Alexander Lebedev has been granted a trip to London in the middle of his trial for hooliganism (the result of punching property magnate Sergei Polonsky live on TV) which could land him five years in jail.

What can you do with a spoon, a blanket and a rope?  Escape from one of Russia’s most famous detention centers, apparently.