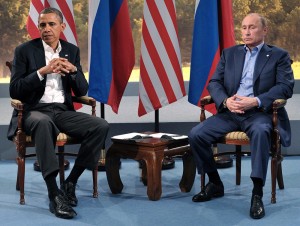 U.S. President Barack Obama has cancelled the presidential summit he was due to hold with Vladimir Putin next month, impelled by Russia’s ‘disappointing‘ decision to grant intelligence whistleblower Edward Snowden temporary asylum.  A White House statement also highlighted a lack of progress in the spheres of arms control, trade, missile defence and human rights.  The Kremlin is apparently ‘disappointed’ with the decision.  The fact that the U.S. President will, however, attend the G20 meeting of international leaders in St Petersburg as planned ‘was seen in the Putin camp as a sign of weakness,’ argues Bloomberg’s Leonid Bershidsky.  Russian senator Ruslan Gattarov has initiated a fundraising campaign for Snowden’s investigation into the security of Russians’ personal data.  Opposition activist Roman Dobrokhotov has warned the leaker ‘not to forget which government you’re fighting against.  Because if you mix it up in the heat of the moment, you’ll have to return to a capsule room (and this one probably won’t be in the airport).’  Vladimir Putin ‘is making scapegoats of gay people, just as Hitler did Jews’: the words of Stephen Fry in an open letter to the IOC and British Prime Minister David Cameron that will have reached the comedian’s 2 million Twitter followers.  Fry is calling for a boycott of the 2014 Sochi Olympics, a view which has found sympathy in many quarters despite the protestations of Deputy Prime Minister Dmitry Kozak that no discrimination against sexual minorities will take place at the Games.

Human Rights Watch has raised claims that members of the press who release negative stories about the build up to the Sochi Winter Olympics are being harassed and threatened by the authorities.  A disgruntled editor from the pro-Kremlin Vostochny Ekspress TV channel has hijacked a news broadcast by unexpectedly inserting a segment from an anti-Putin documentary.  Opposition leader Alexei Navalny’s bid to become the mayor of Moscow has been bolstered by reports that a group of 37 CEOs and entrepreneurs from Russian internet companies will offer him financial backing, prompting words of warning from the Central Elections Commission.  As mass detentions of illegal immigrants continue in Moscow, NGO Civil Assistance has urged that an investigation be launched into an ‘unlawful’ transit camp set up by the city authorities for foreigners awaiting deportation.  Billionaire Vladimir Lisin is capitalising on Moscow’s building boom with a new mill in Kaluga which can turn scrap into construction steel.  Russia’s second-biggest mobile phone operator Megafon is to buy next-generation service provider Scartel for $1.2 billion in order to maintain its lead in the race to provide high-speed internet to Russian consumers.  Following the death of co-founder Ilya Segalovich share prices in search engine Yandex have taken a knocking.

Vladimir Putin is apparently mulling an invitation to join biker gang the Night Wolves for a motorcycle show later this month, but may be prevented from attending by his presidential responsibilities, or, as he calls them, ‘boring matters.’