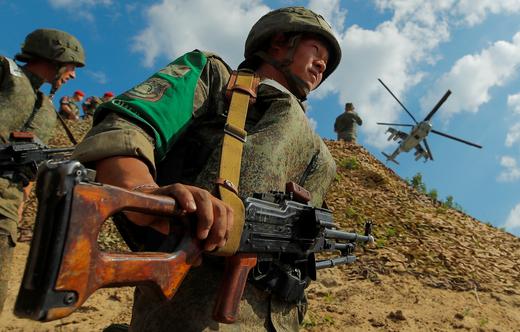 To the delight of the UK Foreign Office, Washington has announced that it will impose new sanctions on Russia this month in response to its claim that Moscow is responsible for the nerve agent attack on former spy Sergei Kripal and his daughter in the UK earlier this year. The Russian embassy in the US called the new sanctions draconian, and their causes far-fetched – it has repeatedly denied responsibility for the Skripal attack. The US will add “more draconian” sanctions later in the year unless Russia vows to cease using chemical weapons.  The ruble is currently at its lowest level since November 2016 thanks to earlier promises of a separate US sanctions bill (dubbed “the bill from hell”); Russian bonds and stocks are also sliding. Trading volume in Russian exchange-traded funds soared since the news.

Workers who helped to build Russia’s new World Cup stadiums for this summer’s tournament are complaining that their wages are still in arrears from January. In the dispute between Canada and Saudi Arabia over the latter’s arrest of women’s rights activists, Russia is siding with the Saudis. Pussy Riot member Maria Alyokhina, part of the original trio jailed for the punk protest in an Orthodox Church, has been barred from leaving the country, possibly due to taking part in a protest in front of the Federal Penitentiary Service in Moscow two days ago. Yevgeny Makarov, the Yaroslavl prisoner whose beating by guards was captured on video, sparking an investigation and several arrests, has been placed in solitary confinement for refusing to take part in a prison humiliation ritual.

Election officials will allow three referendums to be held on the plan to raise the retirement age, surprising analysts who had been expecting the government to block a referendum, given how unpopular the plan is. A new law will phase out crude export duty by 2024 and replace it with a negative excise duty.