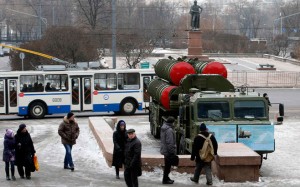 Deputy Foreign Minister Sergei Ryabkov has told the state duma that the goal of Western sanctions ‘is to create social and economic conditions to carry out a change of power in Russia‘.  Ukraine is planning a ‘Day of Silence’ today in an attempt to restore the truce with pro-Russian separatists, though a Ukrainian military spokesman asserted that ‘if separatists attack, we will fire in response.’  Foreign Minister Sergei Lavrov is aware that a deescalation of tensions will require long-term efforts.  Is a frozen conflict the preferable outcome for Russia?   The weekend’s impromptu mediation by French President Francois Hollande has been seen as a way of ‘preventing Russia-EU relations from going to the dogs‘, now that Germany has lost patience with Moscow.  The Kremlin says if France refuses to sell its promised Mistral warships, it will simply demand a refund.  Despite tales of financial woe, Russia will increase military spending by 30% next year to a record post-Soviet high of $62 billion.  NATO jets intercepted 28 Russian military planes over the Baltic Sea yesterday, more than in past weeks combined.

With oil prices falling to a five year low, the ruble and Russian shares have also plummeted.  Investors are apparently worried about capital controls being implemented to slow the fall of the ruble.  Newly-released sales figures for Avtovaz reflect the gloomy economic climate, as does the story of airline UTair’s bankruptcy lawsuit.  Ukraine’s gas transport monopoly Ukrtransgaz says Russia has, following a six-month hiatus, resumed gas flows to Ukraine.  The Ukrainian government will also permit state energy company Ukrinterenergo to import electricity from Russia to cover current power shortages caused by a lack of coal.  Estonia has imported its first natural gas from Lithuania, via Latvia, in a move to reduce its energy dependence on Russia.

Could Russia’s Justice Ministry be on the point of loosening restrictions on so-called ‘foreign agents’ (NGOs)?  Liberal TV channel Dozhd has been ousted from its premises, again.