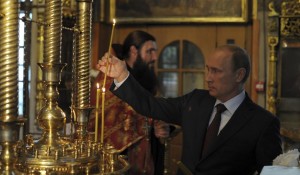 The United States and European Union are reportedly seriously considering banning U.S. and European companies from cooperating with Russia on energy projects, a move which would dramatically affect the operations of giants like Exxon Mobil Corp and BP.  The EU has delayed the implementation of sanctions against Russia in order to ‘give Russia a chance to show its willingness to be honest‘.  As reports emerge that Russia has successfully tested a long-troubled intercontinental nuclear missile, it appears that Ukraine has started building a wall along its border to block the influx of fighters and armaments from its neighbouring Eastern ‘aggressor‘.  President Vladimir Putin has also ordered a series of snap combat readiness drills in the Eastern Military District.  Despite this, Ukraine’s President Petro Poroshenko is positive about prospects for a peaceful settlement as 70% of Russian troops have reportedly moved back across the border.  The acting Prime Minister of Crimea, Sergei Aksyonov, has said if Europe recognises the legitimacy of the Scottish independence poll, they are obliged to follow suit for the Crimean breakaway referendum.  Washington is bolstering efforts to ensure that France’s postponed sale of two Mistral warships to Russia does not go ahead.

A sudden decision by Moscow to slash gas exports to Poland by at least 20%, without warning, has stoked fears about European dependence on Russian gas amid troubled relations.  Gazprom has announced that its first-quarter net profit fell 41% to $6 billion, missing forecasts, as a result of cheaper gas to Ukraine and a weaker ruble.  The world’s largest natural gas exporter is possibly facing the biggest decline in European gas revenue in five years as demand dwindles, with sales to the European Union predicted to fall more than 10% to about $55 billion this year.  Russia’s second largest oil producer LUKoil has launched a bid to purchase a diesel pipeline which runs through Ukraine to Hungary.  Rosneft head Igor Sechin has gained a spot on Bloomberg’s ’50 Most Influential’ list; the only Russian on the rankings.

RFE/RL interviews seven Russian protestors who have, over the past several weeks, defied public opinion and staged solitary protests against Moscow’s campaign in Ukraine.  A United Russia candidate who is due to run in the Moscow City Duma elections has been accused of using a fake Ph.D diploma to attain her spot on the ballot.  Russian intelligence agents have reportedly detained a man in Moscow suspected of being a militant from the Islamic State extremist group.