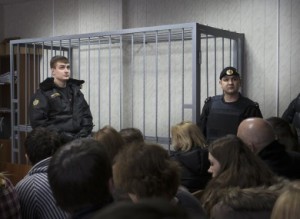 ‘Today’s verdict will go down in history as one of the most shameful moments for Russia since the days of Joseph Stalin’: the reaction of Bill Browder, convicted in absentia of tax evasion, on the ruling that made his deceased lawyer Sergei Magnitsky guilty of the very crime he was trying to expose.  The verdict was ‘redolent of the worst judicial excesses of the old Stalin-era Soviet Union’ says the Telegraph whilst the Guardian concurs that ‘Mr Putin’s third presidential term is taking Russia down a familiar historical path.‘  The United States has expressed its disappointment at the verdict, suggesting the trial was an attempt to discredit those seeking justice.  Was it also a message to Western meddlers?  Meanwhile, Chief Military Prosecutor Sergei Fridinsky has announced that corruption in the armed forces increased by 450% in the first six months of the year.  The new ruling that prevents senators from holding foreign assets abroad has seen a quiet exodus of members of the Federation Council.  Russia’s U.N. envoy Vitaly Churkin has lambasted Western nations for provoking a ‘small propaganda storm in a glass of water’ regarding allegations that the Syrian government has used chemical weapons against its own people.

In an attempt to secure a contract to sell fighter jets to Malaysia, Foreign Minister Sergei Lavrov is offering a variety of sweeteners to the deal.  Fertiliser giant Phosagro will not renew a contract to supply India, the world’s largest phosphate consumer, because it is offering too low a price.  A new international plan to create an Arctic marine conservation reserve is likely to be thwarted by Russia and Ukraine. In a sign of diplomatic progress, Georgian wine has returned to Russia after six years away, but it might have a tough time finding a place in a now saturated market.

Approval ratings for President Vladimir Putin show, somewhat unexpectedly, that he is more popular in Moscow than in the rest of Russia.  LGBT travellers hoping to visit Russia will doubtless be deterred by a decision to make foreign tourists liable for the same ‘gay propaganda’ fines as residents.  A Russian Orthodox youth group has released a video game that gives players a chance to shoot down members of the church-baiting punk band Pussy Riot.  Whether Patriarch Kirill will approve of the game remains to be seen, given the leader is apparently concerned that today’s Russians are having much ‘more fun than needed‘.