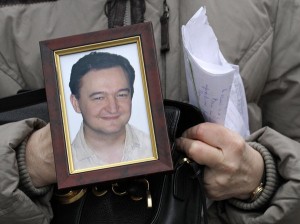 Following Washington’s publication of the blacklist of Russian officials who are banned from the United States because of their alleged involvement in the death in custody of lawyer Sergei Magnitsky, Moscow has retaliated with its own list. Eighteen Americans have been banned from entering Russia, among them employees of the Bush administration and two former commanders of Guantanamo Bay.  Vladimir Putin’s spokesman Dmitry Peskov has described the Magnitsky list as ‘unacceptable’ and ‘a blow to bilateral Russia-US relations’. Hardly bodes well for talks between Kremlin officials and Obama’s national security adviser Tom Donilon, who lands in Moscow today.  Others, among them Leonid Slutsky, head of the Duma’s committee on CIS countries, have downplayed the import of the lists, suggesting that the absence of high-ranking officials on either country’s list indicated a relaxation of tensions.  It has been noted that the judge who sentenced Russian national Viktor Bout to 25 years in prison for arms trafficking, Shira Scheindlin, was not included on the list.

A spokesman for the Investigative Committee has admitted that a case of ‘banal embezzlement’ like that which whistleblower Alexei Navalny currently faces is only being handled on a federal level because of his reputation as a government critic.  The trial, which will begin in Kirov today, has attracted considerable outcry from rights defenders.  Alexandra Shevchenko, one of the founders of Femen, talks to the Guardian about her Hanover protest.  Around 200 nationalist protestors congregated in Moscow on Saturday for a ‘Day of Rage’ which resulted in dozens of arrests.  Police detained seven protesters in Red Square during an unsanctioned demonstration in defense of those imprisoned for involvement in the Bolotnaya Square rallies against Putin in May 2012.  ‘I think the crackdown in Russia on NGOs shows, in a sense, really how isolated and desperate the government there is’.

Vladimir Putin has unveiled plans to send manned flights to the moon from Russian soil in 2018.  Economy Minister Andrei Belousov has warned about the possibility of recession looming.  With officials’ income declarations posted, it has been revealed that Putin’s press secretary Dmitry Peskov apparently earns more than the President.

PHOTO: In a file photograph from 2009, Nataliya Magnitskaya holds a photo of her son, Russian lawyer Sergei Magnitsky, who died in custody that year. The U.S. has named 18 Russians to be penalized for alleged human rights abuses under a law named for Magnitsky. (Alexander Zemlianichenko / Associated Press)